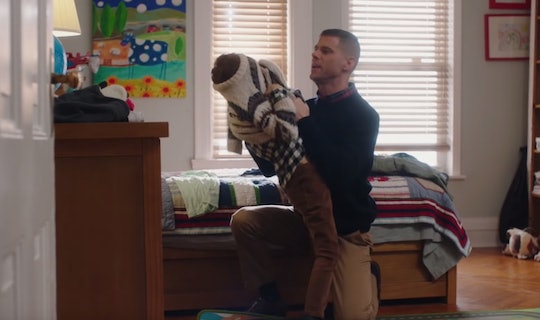 'SNL's Hilarious Skit About Dressing Kids In The Winter Is So True, It Hurts — VIDEO

If you've ever been the parent of a small child, then you'll certainly appreciate SNL's hilarious skit about dressing kids in the winter. Because, whew, the struggle is real. Between the itchy sweaters, puffy coats that make buckling kids into their car seats a nightmare, the perpetually lost gloves... it's a rough season, my friends.

Over the weekend, Saturday Night Live perfectly captured the nightmare that is dressing kids in winter clothing and outerwear. And it did so with the help of a hilariously honest "Macy's" clothing commercial. The spoof begins just like any other holiday clothing ad — with impeccably-dressed kids and adults smiling and showing off their trendy looks. Sleigh bells can be heard in the background. Everyone is happy. Nothing seems amiss until the voiceover lady excitedly announces that men's blazers start at $49.99 and cashmere tops for her start at $79.99. It only snowballs from there.

"And for your little ones," the voiceover actress cheerfully announces, "Macy's has the festive fashion that'll have them saying ... It's too hot! It's itches! Wahhhh!"

The narrator continues, adding that all month long, they're taking "25% off boys merino wool sweaters that won't fit over his head," as well as "40% off cozy corduroys that pitch his little nuts." (LOL.) And for the little girls? Macy's is apparently offering "half off hard, shiny shoes that hurt."

One of the most relatable parts about SNL's winter clothing skit was the bit about snow boots "that are so hard to put on, it'll strain your marriage." It features an annoyed mom coaching her husband how to fit their daughter's foot into a boot.

"You need to put her foot in sideways and twist it," she insists, clearly annoyed by his ineptitude.

"You need to learn, Nathan!" she yells back.

"Daddy's a dumb*ss," he says in a fake-happy way to their daughter.

Another all-too-real parenting moment: The rage that comes with dealing with winter coats and car seats. Oh, and don't forget the part about winter one-piece bodysuits for babies "with so many tiny buttons and snaps, you'll let your baby sit in a loaded diaper for hours just to avoid having to put it back on."

Several brutally honest bits later, the ad perfectly sums up the experience. "Look, we know it's awful for them and for you. But one day, they'll be too old to wear cute little clothes like this and you'll miss it," the narrator concludes. The SNL spoof ends with an endearing final slogan, "The clothes they hate create the memories you'll love."

All I can say is: Yes. Yes, to all of this. I'm glad I'm not the only one who feels like everything is harder when it comes to dressing kids during the winter months. Bravo to SNL for the Christmas miracle of uniting all parents in this universal hell.