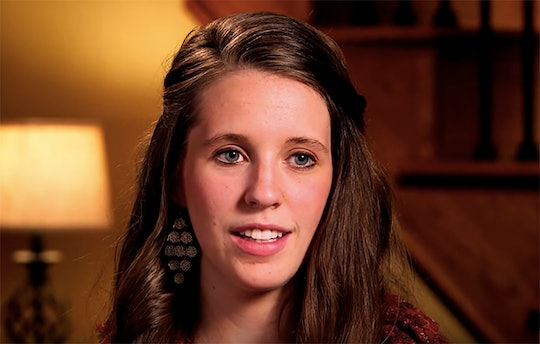 Fans Are Upset About Jill Duggar's Car Seat In This Photo, & It's A Little Out Of Hand

It's a safe bet Jill Duggar probably knows a thing or two about fan backlash. Duggar did spend nine years on reality television a la 19 Kids & Counting and Counting On, after all. Still, as much as Duggar might be seasoned in the art of dealing with critics, it probably doesn't make the negative comments any less tiring — especially when some of them are misguided. The latest incident that fans might be blowing out of proportion involves Duggar's youngest son, Samuel, and a car seat. Apparently, some fans think Jill Duggar's car seat is unsafe for a variety of reasons, and they are voicing their concerns to her directly. Although some of the points might be valid, there's also the chance that the commentary is taking things too far.

Now that Duggar is no longer a cast member on Counting On, it's clear she's trying to establish a fanbase outside of the show. From blog posts about labor playlists to sharing pics of her boys to social media, there's no question Duggar wants to stay connected with the general public. Unfortunately, some of Duggar's ideas haven't been a hit. Take Duggar's stroller hack, for instance. Many parents rightfully expressed concern that Duggar's idea of hooking an infant car seat to an umbrella stroller for convenience was unsafe. Totally understandable, right? Or what about the time Duggar's husband, Derick Dillard, shared a picture of young Samuel sucking on a plastic water bottle with a bottle cap? Some parents pointed out that the bottle could be a choking hazard. In short, Duggar and Dillard have given fans reasons to be concerned before. I get it.

That being said, it seems like Duggar can do nothing right. And on Wednesday, this became especially evident when Duggar shared a photo of herself and her two sons to Instagram. "We just voted! Teaching ‘em young the privilege of letting your voice be heard...and took both boys with me since Derick was at work. lol," Duggar penned, according to Instagram.

Although there's a lot to debunk here (I would love to know where Dillard is working these days), people seem particularly focused on Samuel's car seat. Apparently, some parents think Samuel is too big for his car seat. Duggar did not immediately respond to Romper’s request for comment.

"He looks like he’s getting to big for his carseat, he needs an inch above his head! And if the straps didn’t come with the carseat they can’t be used," someone wrote.

"Sam is looking a little too big for that car seat! Just put him straight in the stroller," another person added. "Poor guy looks squished!"

"You should be more worried about your son’s safety in that car seat that he’s too big for," one commenter argued.

"Hey there! Those strap covers aren't permitted for use and make your carseat not safe for Sam," a fan said.

"The strap covers are unsafe," another person wrote. "And all around the seat is outgrown and he needs the next size."

Of course, I'm sure a lot of these fans are coming from a good place. Many parents have modified their car seats after receiving a helpful tip, and it's awesome when people share their personal stories in an effort to make sure others are safe.

Still, there are some commenters who think this controversy is blown out of proportion.

"Why does everyone think they should have an opinion on sams car seat," a fan asked. "Jill sees it everyday and I’m sure she’s competent enough to know when it needs to be changed. You can’t see everything through one picture. Lol."

"So funny to hear these experts talk about the car seat safety. Anyone with eyes should be able to see that he is leaning forward and if he laid his head jack, there’s at LEAST an inch if not more above his head," another person noted. "Maybe you car seat experts should see an eye expert for some glasses."

"And how do you know he wasn’t slouched in his seat? Leaning forward? At a weird angle?" one person wondered. "Maybe she was out shopping for a new one today. Maybe he spilled something in his and she had to grab a replacement real quick? You don’t know her life. And neither do I."

The commenters above bring up good points. For starters, it's difficult to tell what's really going on here because this is a picture. A picture can tell an inaccurate story because of angles, lighting, and tricky dimensions. Essentially, there's no fair way for fans to evaluate if the car seat is safe or not. And as one commenter mentioned, Samuel is slouching forward in the pic, which could make it appear like he's too big for the seat. In short, there are too many potential tricks of the eye here to definitively say that Duggar is putting her baby in danger.

As for the car seat's strap covers, it's possible commenters are onto something. "Do not use any aftermarket products with your car seat since often they were never crash-tested with these products and may alter the seat’s functions during a crash," Consumer Reports' website advises.

At the end of the day, it's important to remember that Duggar wouldn't knowingly put her children in danger. If there is something potentially unsafe about Samuel's car seat, I'm sure she'll make adjustments.