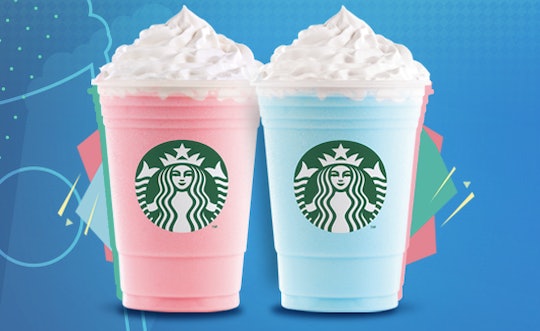 Good or bad, there are just some songs, books, movies, and even drinks that can immediately transfer you back to middle school. That’s what Fruitopia and *NSYNC do for me. Well, jumping on the nostalgia train, Starbucks is releasing Cotton Candy and Bubblegum Frappuccinos, and they just might make you ready to decorate your Jansport backpack with a whiteout pen, pull out those butterfly hair clips, and pop in your Spice Girls CD.

In hot pink and sapphire blue, these startlingly sweet flavors fall right in line with Starbucks’ other recent fruity flavored Frappuccinos — like Acai Mixed Berry Yogurt and Peach Pink Fruit — and they’re available for a limited time. Insider calls these new Frapps “Instagrammable drinks,” and they definitely aren’t wrong. I can just picture photos of them on Instagram being held by hands donned with chunky rings and jelly bracelets from the late ‘90s and early ‘00s. However, unfortunately for us here in the United States, these Frappuccinos are only available in Mexico. Insider also reported (and translated from the Starbucks Mexico Instagram post) that these Frapps are part of a “Back to the Flavor” initiative and they “aim to take you to the best moments of your childhood or adolescence in a single sip.”

What was once known as a high-end coffee brand now has turned into an empire of coming up with the next creative drink and flavor combo that doesn’t necessarily have anything to do with coffee. I know when I’m in line at least, I’m one of the few people who actually get a drink with, well, coffee in it. Everyone else is sipping on the refreshing teas and milkshake-like Frappuccinos. Even in the UK, Starbucks has just released Cheesecake-style flavors of Frappuccinos. With flavors like Blueberry Cheesecake Creme, Caramel Cheesecake Creme, and Mocha Cheesecake Creme, these Frapps will definitely taste like dessert. But hardcore coffee fans don’t fret, you can also get these made with a coffee base, according to Hypebae. Earlier this year, Asia Starbucks released a new Green Tea Frappuccino and Midnight Mocha Frappuccino, reported Hypebae. The Green Tea Frappuccino has a creamy cheesecake base with “green tea cookie crumbles” on top of that whipped cream, and the Midnight Mocha Frappuccino has dark cocoa powder infused coffee. Um, yum?

As for the United States, as I’m sure you’ve heard by now, the coveted Pumpkin Spice Latte is coming back early this year — Aug. 28 — much to everyone’s delight, according to Business Insider. So even though it may feel like the seven layers of hell outside, you can enjoy this fall-inspired beverage. Maybe if we all drink one at the same time it will bring on the fall temperatures, too? I hope so. Like the McRib, since this is a limited time only beverage, it’s understandable that Starbucks would want to take advantage of releasing it earlier and making that dough.

Are the new Cotton Candy and Bubblegum Frappuccinos worth crossing over the border for? Possibly. But if you want to play it safe, just enjoy looking at other folks enjoying them by searching the hashtag #BackToTheFlavor on Instagram while sipping on your Pumpkin Spice Latte after Aug. 28.

More Like This
31 Sweet & Savory Apple Recipes To Make This Fall
These Oktoberfest Instagram Captions Will Get Likes & Prosts
16 After-School Snacks For Hangry Kids
Baby-Led Weaning: A Comprehensive Guide To Introducing Solids