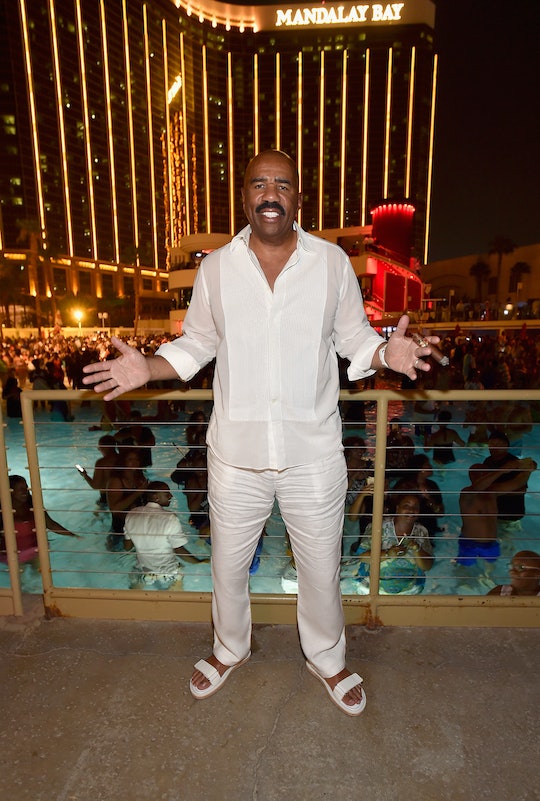 Feeling groggy after a late night spent replaying the Oscars unbelievable Best Picture fiasco? Well, apparently one comedian didn't have the late night that left the cast and crew of La La Land — oh and the rest of the world watching live on Sunday night — reeling from a Best Picture moment that'll go down in the history books. Steve Harvey's first tweet after the Oscars on Monday morning perfectly captured the hilarity and absurdity of the last 10 hours.

There was much hype leading up to the 89th Annual Academy Awards, with the Ryan Gosling and Emma Stone musical La La Land predicted to sweep most if not all of its 14 Oscar nominations — including Best Picture. And on Sunday night, as actors Warren Beatty and Faye Dunaway read from the now infamous wrong Oscars envelope, it seemed like La La Land had one Best Picture — but the Best Picture Oscar was actually intended for the critically acclaimed film, Moonlight. It was an Oscars mixup of truly epic proportions, and the internet lit up Sunday night as it was reminded of another similar mixup — when Steve Harvey crowned the wrong Miss Universe in 2015.

I guarantee you Harvey was totally up late last night, probably laughing in confusion with the rest of the Oscars audience watching from home. It didn't take long for pop culture savvy fans to immediately link the Oscars mixup to Harvey's Miss Universe snafu. As the Steve Harvey meme began to be tweeted out across Twitter, I bet he was laughing along with gleeful schadenfreude as the circumstances of the Oscars Best Picture flub came to light on the awards show stage.

Just as a quick refresher back to Miss Universe 2015, of which Harvey was the master of ceremonies. Harvey initially read from the card, announcing that Miss Columbia, Ariadna Gutiérrez, was the new Miss Universe — but it was actually Miss Philippines, Pia Wurtzbach. Seeing the crown being taken off of Gutiérrez's head and then placed onto Wurtzbach's was a super awkward, cringe-worthy moment that Harvey himself described as "four minutes of hell" on The Tonight Show.

It's no wonder the internet called back to the moment in the wake of the Best Picture mistaken switcheroo, as the cast and crew of La La Land handed over their Oscars to the cast and crew of Moonlight. PricewaterhouseCoopers, official accounting firm that counts the Oscars ballot votes, issued an official statement in the wee hours of Monday morning apologizing for the Best Picture envelope mixup. "The presenters had mistakenly been given the wrong category envelope," the PwC statement read in part. Movie fans jumped on Beatty's Oscars mistake, blaming him for the flub when in truth, it was entirely out of his control. To that end, Harvey offered some measure of comfort to Beatty on Monday morning:

It only took almost two years, but it looks like Steve Harvey's moment of awards show redemption has finally come!