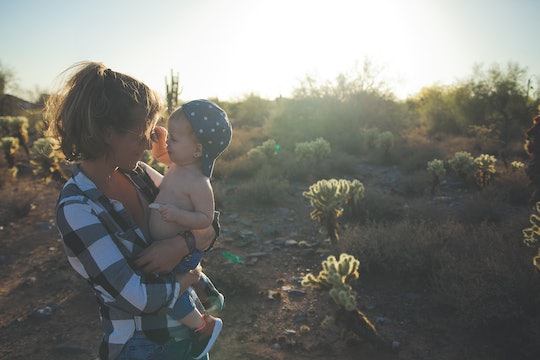 How Millennials Parent Their Kids Vs. Older Generations

Move over, Gen X — there's a new group of parents in town. Sure, plenty of people have written handwringing articles about how millennials just won't grow up, but the data shows a different story. Tons of millennials are becoming parents right now and, no surprise, they're doing things a little differently than their predecessors. The studies on how millennials parent compared to older generations show that these new moms and dads are trying hard to be as responsible and socially conscious as they can be, all while dealing with way more information than ever before.

Now more than ever, people are aware of issues of identity, privilege, and bias. Consequently, many millennials are trying to raise their children to be more open-minded. And despite the growing prevalence of gender reveal parties, many millennial parents are resisting the limiting "princesses for girls, trucks for boys" dynamic when it comes to encouraging play time. A study from TIME showed that 50 percent of millennial parents had purposefully bought their children gender-neutral toys, compared to only 34 percent of Gen X-ers.

And that's not the only way that millennial parents are working to be responsible. They're using their purchasing power to go for brands that they believe share their values, they get into organic and sustainable food to feed their children. That same TIME study found that millennials were way more worried than previous generations that other parents were judging what they fed their children, and they're much more involved in activism.

And they're doing this all with far more information at their fingertips than ever before. Back in the day, new parents often relied most on their friends and relatives for advice, or relentlessly dog-eared their worn copy of What To Expect When You're Expecting. But now, according to a study from Crowdtap, millennial parents turn to the internet for advice almost twice as often as they turn to their loved ones who have already been through it.

That can be an amazing thing — there's all sorts of easily accessible info on important issues like car seat safety, and you don't just have to rely on what your cool cousin Susie said worked with her kids, who seemed to turn out alright.

But misinformation can also be a definite problem. (Um... the rise of anti-vaxxing sentiment, anyone?) And that good old TIME study found that 58 percent of millennial parents found this large amount of information available to them to be overwhelming to some degree. (Sometimes, you just want to listen to your cool cousin Susie, and not a million websites with slightly different advice.)

Of course, the rise of technology is another biggie. Millennial parents are also having to grapple with how much screen time is too much. They want their children to spend less time looking at screens, but that's often easier said than done. At the same time, they really want schools to prepare their children for a tech-heavy future, and are less likely than other parenting generations to say that schools are doing a good job teaching technology, according to a study from the Center for the Digital Future.

But overall, millennial parents just want to be involved. Past generations may have been helicopter parents, but these new mothers and fathers are being dubbed "passenger plane parents."

Sure, it may be easier than ever in today's world to retreat into a private bubble, but millennials want to experience things alongside their children, whether through a new gadget, getting involved in activism for an important cause, or baking up the latest health trend together. And, well, that's pretty darn exciting.