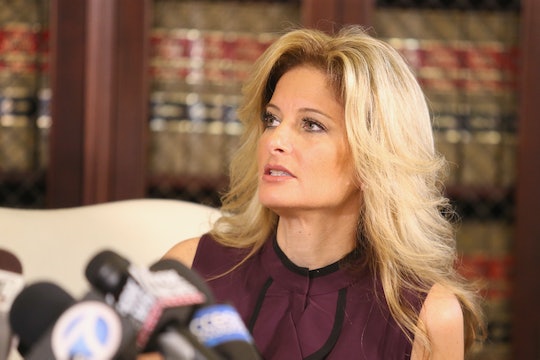 In the wake of one of the most recent allegations of sexual assault against Republican nominee Donald Trump, Summer Zervos' cousin has released a statement saying that he is "bewildered" by her allegations. Zervos was on the fifth season of the The Apprentice in 2006 and appeared Friday at a press conference with her attorney Gloria Allred in Los Angeles to tell her story. Zervos alleges that during her stint on the reality competition show, Trump had invited her to his bungalow to for a meeting about a possible job. She said at the press conference, "He put me in an embrace and I tried to push him away. I pushed his chest to put space between us and I said, 'Come on man, get real.' He repeated my words back to me, 'Get real,' as he began thrusting his genitals."

Later on Friday, the Trump campaign released a statement from John Barry, Zervos' cousin, who wrote that he was "completely shocked and bewildered" by Zervos' claims. Barry said that his cousin had nothing but "glowing" things to say about the reality TV host since her time on the show. Barry added that he believes Zervos wishes she could "still be on reality TV" and is acting out in anger because she invited the presidential nominee to her restaurant during the primary in April and he declined.

Barry's statement echoes Trump's statement about Zervos' allegations. The presidential candidate said in a statement published on his website, "I vaguely remember Ms. Zervos as one of the many contestants on The Apprentice over the years. To be clear, I never met her at a hotel or greeted her inappropriately a decade ago."

"That is not who I am as a person, and it is not how I've conducted my life," the candidate added. Trump went on to blame the media for giving airtime to the Zervos and Allred, Zervos' attorney, who often represents high profile discrimination cases. Trump that it's a sign of a "broken system" that "Gloria Allred is given the same weighting on national television as the President of the United States." (Which is sort of ironic, since he doesn't have much respect for President Obama, either.)

Both Barry's statement about his cousin's allegations and Trump's response to her allegations sort of miss the mark, though. All of the sexual assault allegations against Trump, including Zervos', have not been confirmed or corroborated by evidence. But writing her claims off just because Zervos had had contact with Trump since the reported incident isn't a sign that her claims aren't true.

Many women wait to report sexual assault for various reasons, like fear of their assailant or that they won't be believed. Waiting to report doesn't make a claim untrue. Some of the the accusers, like Jessica Leeds and Rachel Crooks, reported that it wasn't until the second presidential debate, when Trump denied having ever groped a women as he described in the Access Hollywood tapes, that they felt they needed to speak out. Many of the allegations, including Zervos', describe acts similar to the kind Trump joked about with Billy Bush on the leaked 2005 tapes.

Even Trump's attack against Zervos' lawyer, Gloria Allred, could be seen as a little misplaced given the severity and subject matter of the allegations. In 2012, Allred represented Jenna Talackova, a transgender beauty pageant contestant who accused Miss Universe Canada for kicking her out of a pageant because she wasn't born a woman. Trump, who partly owned Miss Universe at the time made a lewd comment about how Allred would be impressed with the size of his genitals.

The Trump campaign continues to promise that there is "evidence" coming to debunk his accusers' allegations. Which would be great — Trump is innocent until proven guilty and has a right to due process. But if the evidence is merely more statements from family and friends who victim blame, like Zervos' cousin, Trump's claims that their lawyers are hacks, or that the accusers aren't attractive enough to be assaulted, his campaign might want to up their investigation game, because it's just not enough.

Trump can attack the women and their stories all he wants, but if he wants to put this whole ordeal to bed, he might have to change his strategy.