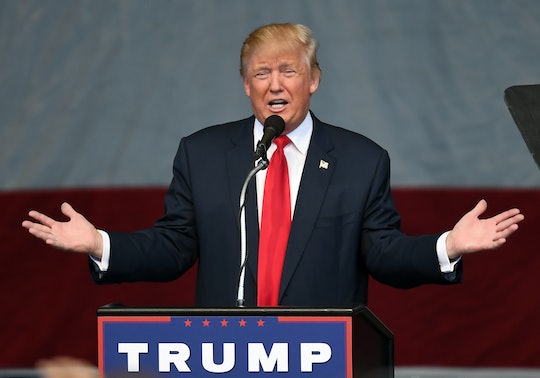 Early Thursday morning, Twitter was nothing more than a ripple of reactions to the leaked audio between Republican presidential candidate Donald Trump and Access Hollywood's Billy Bush. In the audio, Trump lewdly describes an attempt to have sex with a married woman, how attracted he is to beauty, how he just kisses women without "waiting" and how women will let him do anything because he's a "star." While every shocked, outraged, and angered response is warranted, this response to Donald Trump's Access Hollywood tape says what's really wrong with it.

The tape was recorded in 2005, when Trump was filming a segment for Access Hollywood about his upcoming cameo on the daytime talk show Days Of Our Lives. While riding a bus to the shoot, Trump details certain encounters with women to Bush; telling him how he failed to have sex with a married woman, and how he is capable of doing whatever he wants to do to women because they'll "let him," given his stardom and perceived power. The language evoked by a man running for president of the United States is disturbing, to say the least, not just because this is conduct unbecoming of someone running for office, but because this is a fear every woman feels and, sadly, understands.

While it's obvious that Trump seems to lack basic knowledge about consent — or at least appears to believe himself above needing or requiring it — there are multiple reasons why the tape is disturbing. This one tweet by Mo Ryan perfectly describe why a conversation that isn't necessarily about all women, affects all women. Women are acutely if not painfully aware that these conversations take place when we leave rooms or offices or just the vicinity of others. What Trump describes in an apparent apology as, "locker room banter" and a, "private conversation," has a lasting affect and only fuels the rape culture that leaves 1 out of every 6 women a victim of sexual assault or sexual violence. When he says he can, "grab them by the p*ssy" and he can "do anything" because he's a "star," every woman feels the same chill she feels when she walks home alone or passes a group of catcalling men or hears the whispers of certain male coworkers.

In a culture where women are paid less than men — a reported 80 cents for every dollar a man earns — and are constantly fighting for reproductive freedom and the right to make our own choices about or own bodies, hearing a man vying for the Oval Office talk about women as if they are disposable toys created specifically for his pleasure is not only infuriating, it's at this point (sadly) not surprising. Trump has a notorious history of saying derogatory and misogynistic things about and towards women. During the first presidential debate, Trump's opponent and Democratic presidential candidate, Hillary Clinton, highlighted the highly offensive things Trump said about former Miss Universe Alicia Machado. Clinton pointed out that Trump called Machado "Miss Piggy" after she had gained weight, and "Miss Housekeeping" because she is Latina. Even after the debate, Trump doubled down on his misogyny, saying:

We had a 'tremendously difficult time with her' because 'she gained a massive amount of weight, and it was a real problem.'

Women make up more than half the population of the United States, and cast an estimated four to seven million more votes than men in recent elections. Make no mistake, they are listening to Trump's comments — both past and present — and intend to make their voices heard come November. Women are tired of wondering if a man is saying something lewd, dangerous, and disgusting about them, every time they leave a room.

More Like This
The FDA Is Warning Parents To Not Use Baby Neck Floats After One Infant Died
Lauren Conrad Shares Experience With "Lifesaving Reproductive Care" After Ectopic Pregnancy
Sarah Michelle Gellar Is Facing A Terrifying Parenting Milestone: Sleep Away Camp
10 Ways Prince George & Prince Louis Are So Different From Each Other