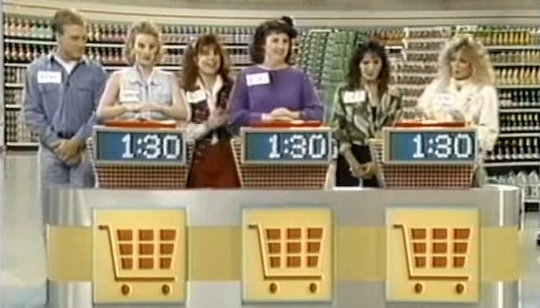 'Supermarket Sweep' Is Coming Back, Because Dreams Do Come True

Anyone else out there remember when game shows were basically the best thing on television? I remember staying home "sick" from school just so I could get my full dose of daytime television. A healthy mixture of soap operas, game shows, and commercials for cleaning products. All while snug under a blanket on the sofa, drinking flat ginger ale to cure my fictitious sore stomach. I might have to call in sick soon, it seems, because one of my favorite game shows will be making a return to the small screen. That's right; Supermarket Sweep is coming back, because someone out there obviously loves us.

For those of you who don't remember the show, perhaps because you were showing up to school on the regular, Supermarket Sweep was the classic quiz/insane grocery cart racing game show that became an international sensation in the 90's. The show was actually originally broadcast on the ABC network 60's, but saw a revival in the 90's on the Lifetime network hosted by David Ruprecht (possibly because grocery prices had risen wildly and the savvy producers of the show understood people would need street smarts and survival skills to get their hands on the best food prices). The manic pace of the show's trolley dash, coupled with the pop culture trivia questions and clues written on every day food items... Game of Thrones doesn't stand a chance against the power of Supermarket Sweep.

Fremantle Media, the company behind Supermarket Sweep, sent out a press release announcing its plans to release a new version of the game show originally created by Al Howard. His son Henry Howard wrote in the press release:

In Supermarket Sweep, one lucky team tries for the bonus money, but on this show, there are no losers—only shoppers having a great time. I’m delighted that Fremantle has made the exciting decision to bring back this classic game show, and I look forward to working with their talented teams around the world. In honor of Supermarket Sweep’s return….I believe I’ll go shopping!

Fans were justifiably excited to hear of their favorite game show's triumphant return, probably dreaming (as I am) that they might get a chance to be on the show now that they are grown ups and able to hit the grocery store aisles unattended.

So why bring the show back now, other than to make all of my greatest grocery store game show dreams come true? According to Vasha Wallace, EVP, Global Acquisitions and Development for Fremantle Media:

The time is ripe to bring back this all-time favorite game show which has traveled with such success over the years. Now, modern technology allows us the opportunity to update the show, making it relevant for a 21st century audience. It is a great addition to this year’s MIPCOM slate and given the interest we’ve had already we’re confident that everyone will be as excited for its return as we are.

Although not to be a drag, here's hoping the show isn't too updated. There was something so fantastic about the original show; perhaps it was all of the opportunities for things to go horribly awry. Crashed grocery carts, groceries toppling over... a reality show that was actual reality. Although I wouldn't mind seeing contestants struggle away at self checkouts. It would make me feel less ridiculous in my own struggles.

No word yet on when the show will be released, but I'm willing to take comfort in the knowledge that it is coming back. Hopefully the same as I remember (sweaters, massive hair, mom jeans, et al), but only better.

As if it could ever be better, who am I kidding?