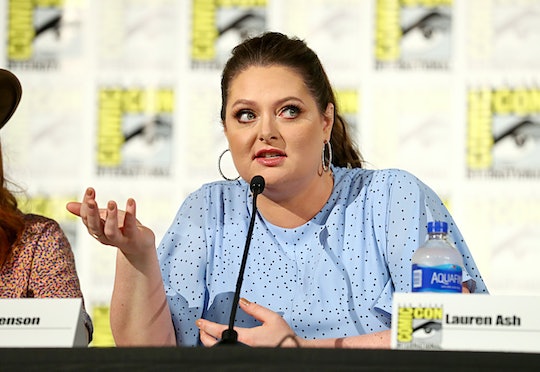 'Superstore' Actress Lauren Ash Opens Up About The PCOS Sisterhood

If you've never heard of Polycystic Ovary Syndrome (or PCOS), perhaps you should consider yourself lucky. It's a hormonal disorder that affects women in their reproductive years that comes with a myriad of symptoms and side effects that can sometimes be difficult to pinpoint. Which can mean that if you are struggling with trying to figure out whether or not you have PCOS, sometimes things can get terribly lonely. You need a community of people who know what you're going through. Superstore actress Lauren Ash says the "PCOS Sisterhood" saved her life after the devastating diagnosis, because the last thing a woman living with PCOS needs is to feel alone.

A few years ago Ash was diagnosed with PCOS after some unexplained issues with weight gain; as she told People in April, she was gaining weight rapidly despite diet and exercise and doctors were not quite figuring out what the problem might be: "It was my dermatologist who was finally like, 'I think maybe you have this,' and so once I got diagnosed it was amazing just to have an answer. I think a lot of women [living with PCOS] certainly with the metabolic issues start to feel like they're losing their minds." Despite her relief to get a diagnosis, Ash admitted she felt alone in her problems.

Which is when the PCOS Sisterhood came in.

Ash eventually connected with thousands of women all over the world when she shared her story on Twitter about a year ago. After receiving an overwhelmingly positive response from women who were going through exactly the same thing, she realized she had a "responsibility" to use her platform as a celebrity to shine a light on PCOS, as she explained to Entertainment Tonight at a recent Comic-Con event.

I created an Instagram account called PCOS Sisterhood and I've connected with all of these women from literally around the globe. It's so amazing.

The Instagram page @PCOS Sisterhood invites women to share their stories through a PCOS Membership card, where they can offer advice and tips and similar experiences with each other in a safe community setting. Something Ash found especially helpful when she was struggling with suicidal thoughts after being prescribed with progesterone, as she wrote in an essay for Women's Health in April:

Finally, I mustered up all my courage and told my endocrinologist, “I’ve been having suicidal thoughts, and I think it’s from the progesterone." Her reply? “No, I don’t think so.” She wouldn’t accept my report of my own experience in my own body! (Note: Since connecting with many other PCOS sufferers I’ve come to learn that lots of women have had the exact same experience on progesterone.)

Perhaps one of the most important messages Ash has shared through her experience with PCOS is this; women need to be their own best health advocates. The story she shared in her Women's Health essay is one many women will recognize; symptoms being brushed off, feeling unheard and misunderstood. This is why a community like the PCOS Sisterhood is so important.

Because if they are telling the same story again and again, perhaps all of them will finally be heard.