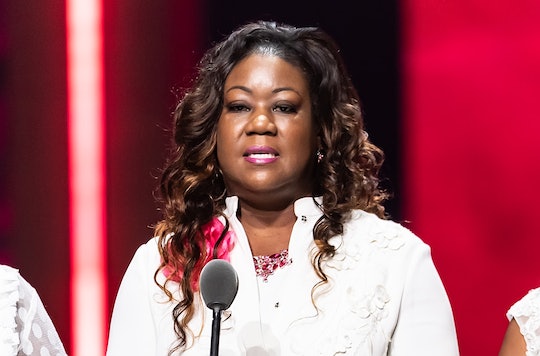 "Don't Wait Until Something Happens To Your Child": Trayvon Martin's Mom Urges Action

It has been eight years since Trayvon Martin was shot and killed. Eight years since his mother lost him forever and she has made it one of her missions in life to ensure other parents don't have to suffer like she has. In a recent essay for Good Morning America about being a Black mother in America, Sybrina Fulton urged parents to act now and not wait to take a stand "until something happens to your child."

In her essay for Good Morning America, as part of an initiative to share the voices of Black mothers who have been affected by violence and racism, Fulton opened up about how the past eight years have been for her since she lost her son. In February 2012, as CNN reported, neighborhood watch officer George Zimmerman followed her 17-year-old son home from a convenience store in Sanford, Florida and shot him in what he claimed was an act of self defense. Zimmerman was charged in the teen's murder and ultimately found not guilty of the crime by a jury in 2013, according to The New York Times.

Fulton, who is currently running for Miami Dade County Commissioner in District 1 on a platform of creating safer communities and gun safety, admitted in her essay that there's "not one single day goes by that I don't think about Trayvon." While Fulton still cries for Trayvon, she also has another son, Jahvaris Fulton who testified during his brother's murder trial, and wrote that she has to "keep moving because I have to fight for him." "I can't do anything about Trayvon," she wrote for Good Morning America. "The situation happened, the tragedy already occurred and I can't save him."

In the years since Trayvon Martin's death, there have been more instances of police brutality and systemic racism against the Black community. Most recently, according to the St. Paul Pioneer Press, George Floyd's death in police custody in Minneapolis on May 26 instigated protests across the country. And Breonna Taylor's death during a police raid of her home on March 13 in Louisville, Kentucky, according to CNN, has launched nationwide calls for justice.

These deaths have been especially difficult for Fulton, who wrote for Good Morning America that they were "triggers" reminding her of her own loss. She wrote, "The children of other mothers dying, those are triggers. They trigger your emotions, the sadness, the tears. Your heart hurts, your chest hurts, I get headaches. To relive that all over again, I can't equate it to anything but PTSD."

Fulton ended her essay with some advice for parents of Black children for dealing with the potential dangers of systemic racism in this country: Do something now. "I was never a person that spoke out. I was never a person that protested. I had my thoughts and things that I believed in," she wrote in her Good Morning America essay. "But we can no longer be silent. Don't wait until something happens to your child. Get involved now so something doesn't happen to your child."

Running for office is one way to take action, but there are other ways parents can make a difference too. You can encourage your kids to speak out when they see racism whether it's directed at them or someone else. You can teach them to be anti-racist in their own lives, using tips from Tolerance.org. And encourage them to do the right thing, even when it's uncomfortable.