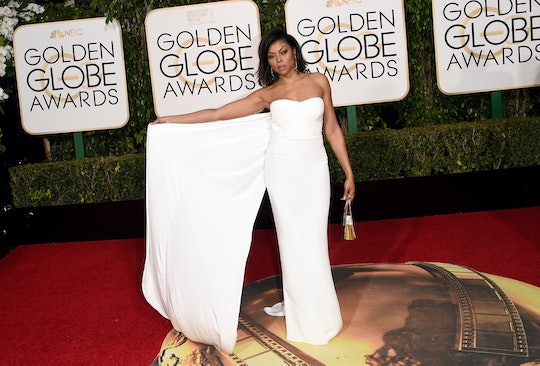 You would expect the woman behind Cookie Lyon to wear something outrageous and over-the-top to an award show, but Taraji P. Henson’s 2016 Golden Globes dress was a departure from the clothes viewers are used to seeing her wear on Empire. Henson arrived at Sunday’s award show donning a simple (but stunning) strapless white floor-length gown.

The 45-year-old actress, who was nominated for Best Performance By An Actress In A Television Series — Drama, had an easy time making jaws drop. Of course, no red carpet ensemble is complete without a few accessories. And Henson did not disappoint in that department. Her black and gold clutch was the perfect addition to her look, along with lovely rings and earrings.

Henson deserves all the applause for keeping it so simple at the 2016 Golden Globes, though it's not a total surprise given her traditional award show attire. In her most recent red carpet appearance at the 2015 Emmys, Henson wore a black Alexander Wang gown, which featured a lace skirt and chain straps. At her last Golden Globes appearance in 2009, the actress wore a black and brown ruffled dress. Both gowns were simple, stunning, and sexy, and Henson’s 2016 Golden Globe dress is no exception to that style rule.

Even though she seems to be an award show staple at this point, it’s refreshing to see that she continues to keep things simple, but chic.

All hail Taraji P. Henson! Queen of the empire and red carpet.