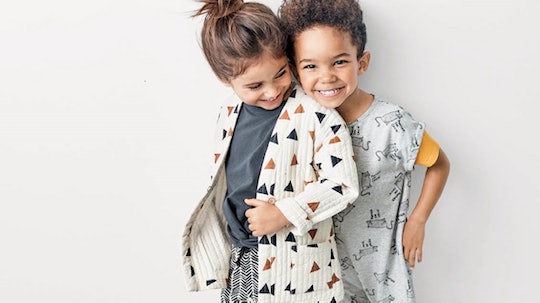 Parents of toddlers, get ready to blow all your money on an adorable new wardrobe. Target's Art Class clothing line is expanding into toddler sizes, and there's a pretty good chance it's going to be irresistibly cute.

Target calls Art Class its "fashion forward" option, and explains in a press release that the line offers trendy pieces for parents who want stylish options. It's been around for big kids since January 2017, but it will be available in sizes 12m to 5T as of February 24. It'll have everything from tops and pants to dresses and jackets, and the store says it's aiming for affordability, with prices in the line ranging from $7 to $25 (most pieces are under $13, however).

I'm one of those moms who should probably just have her paycheck sent directly to Target, so this is a very exciting development for me. My 3 year old can almost always be found wearing something from Target, but she hasn't been big enough to try anything from the Art Class line. I'm definitely looking forward to browsing the tons of new options that will be available for her with its expansion. It's pretty smart timing from Target, since lots of families are likely starting to think about their spring wardrobes and dreaming of putting their winter clothing away for another year.

Up to now, my daughter has typically been decked out in Target's Cat and Jack line because it's always offered baby and toddler sizes. The massive success of that line may have inspired Target to move ahead with Art Class's expansion — the Minneapolis/St. Paul Business Journal reported that Cat and Jack did $2 billion in sales in just two years following its launch.

Kids clothing in general is a really lucrative market. CNN reported that sales grew more than four percent last year, despite the fact that the birth rate has fallen in the U.S. Though Americans are having fewer children, they're spending more on clothing for the kids they do have. And Target is probably banking on the fact that if they can lure parents in to shop for their kids, they'll probably end up buying other stuff, too (maybe even an outfit or two from the adult brands' new spring collections).

I personally do most of my shopping for groceries and household necessities at Target, and no matter what's actually on my shopping list, I almost always end up making a quick jaunt through the kids clothing section. I just cannot resist the siren call of all those colorful, adorable, and reasonably priced outfits. And don't even get me started on all the cute shoes, purses, headbands, etc. I usually don't feel too guilty about throwing an extra pair of toddler leggings or a cute graphic tee into my cart when they're often around $5 or so. But the most dangerous thing that can happen to me in Target is a kids clothing sale, because even $5 a pop really adds up when you walk out with half the store.

I'll definitely be keeping an eye for Art Class clothing in toddler sizes next time I'm in Target. If you can't find it in your store, you can always check it out on Target.com.