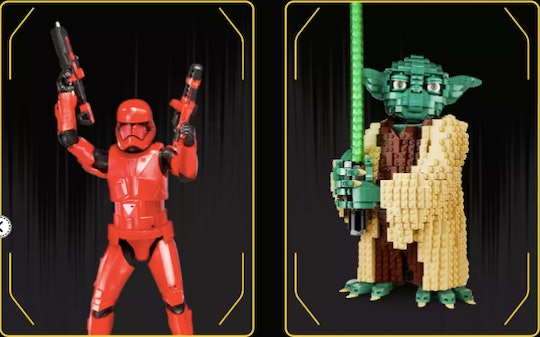 For Star Wars fans, the most important place in the universe right now is Target, the beloved retailer right here on Earth. In advance of Triple Force Friday, Target revealed new Star Wars products all week, and there are some pretty amazing items out already. It's an exciting time for anyone who collects droids, storm troopers, and anything else related to that galaxy far, far away.

The Star Wars product reveals were about building anticipation for the launch of the Disney store at Target on Friday, October 4. To help get guests all hyped up for the big opening, Target released new, exclusive Star Wars toys every day in the week leading up to the store's opening. For fans who couldn't wait, this offered a fun sneak peak at all the new goods. At present time, the exclusive Target toys include a D-O Interactive Droid, as well as a Mandalorian figure. This newest batch of collectibles is sure to delight any young Jedis you happen to have running around your home.

The opening of a Disney Store in Target coincides with Triple Force Friday this October 4, which marks the official launch of new products from Star Wars: The Rise of Skywalker, The Mandalorian, and Star Wars: Jedi Fallen Order, according to the Star Wars official site. Basically? It's the best holiday for Star Wars fans since May the fourth. There's enough future Star Wars films on the horizon to keep the store stocked with new heroes, villains, and porgs for quite a while.

Although prices and purchasing info aren't out quite yet, here's a little info about the products below. The D-O Interactive Droid on the far left is billed as "your new mechanical buddy," while the LEGO Star Wars Episode IX Y-Wing is a great set to help collectors build out their fleet. Lastly, the Futura X Funko figure, with its distinctive street style, is simply too striking and fun to ignore.

So how do you get in on this action? Launching at 25 select Target stores (and at Target.com) in October, the Disney Store in Target will have over 450 items for sale, and this includes over 100 items that were previously only available at Disney retail locations. With plenty of toys, apparel, and accessories available, it looks like your shopping location for the 2019 holiday season is already a given.

Plus, the shop-within-a-shop will offer a unique experience to store visitors. Music, interactive displays, and even seating areas will be available at the Disney Store in Target locations, according to A Bullseye View newsletter. Disney fans of all ages are going to have a blast exploring these unique displays.

Chances are, fans of many, many different series are thrilled by the news of a legit Disney Store opening right inside Target. Remember, all of Disney's entertainment platforms can show up in these stores, so Disney, Pixar, Marvel, and (of course) Star Wars merchandise is also represented at the Target shop. A little bit of everything is going to have a place in the store, from superhero gear to classic Disney characters. Your Target runs just became a little more magical with the addition of these Disney shops inside Target. And because of that, it's also easier than ever to shop for your favorite Star Wars fan.