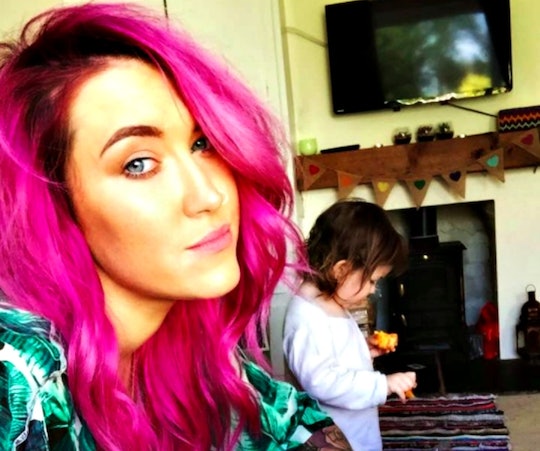 Being a parent isn't easy, especially when you feel like everything you do is being judged. As many parents know all too well, social media is rife with opinions about your parenting style, from how you store your baby bottles to whether or not you should be talking about your kids in the first place on Facebook. It's worse when those judgements come from those who claim to be "concerned" about your identity or physical appearance. Thankfully, one woman isn't backing down from that particular fight and is taking on critics who think women who are tattooed aren't the "mom type."

Recently, an acquaintance allegedly told Gylisa Jayne that she didn't "seem" like a mom because of her "look," which includes trendy pink hair, tattoos, and piercings. Jayne subsequently took to social media to respond to that judgement, and her words will likely resonate with anyone who's gotten side-eye on the playground for their tattoo sleeves or nose rings.

Jayne wrote that she knew she should have shrugged off the comment, but said that it bugged her more and more, the longer she thought about it. In her post, she wrote that it's unreasonable for people to expect mothers to "sacrifice every aspect of themselves to fulfill their role." Apparently, moms aren't supposed to have dyed hair or tattoos. Or have any personality whatsoever.

Of course, as she pointed out, that's simply not true.

When we become mothers, it isn't because we are just dying to wipe someone else's arse. It's because we want to add to our lives, and watch someone else grow ... Motherhood isn't an exclusive club that you can only get into if you look or act the right way. It's full of women that all have lives and tales and colorful histories. Women of every type, from every background and every descent.

Jayne added, "So I might not fit someone else's expectations of how I should be, but my daughter reckons I'm doing a pretty good job."

More of this please! Actually, Jayne smashes "mommy" stereotypes on social media all the time. In addition to her blog, she often posts on Instagram and Facebook about how parenting stereotypes are restrictive AF. Recently, she reminisced about how during the "fun part of maternity leave" (as in, before the baby arrives) she would scroll through Instagram ogling parenting lifestyle pages.

Like many new parents, she quickly learned that a lot of people were putting one on sometimes. Just because it looks like everyone is living their best parenting lives on social media does not mean that a "perfect photo is a perfect life," Jayne writes.

She's right. Tattoos or not, every parent is just doing the best they can do right by themselves and their children. And that should be enough, no criticism or judgment necessary.