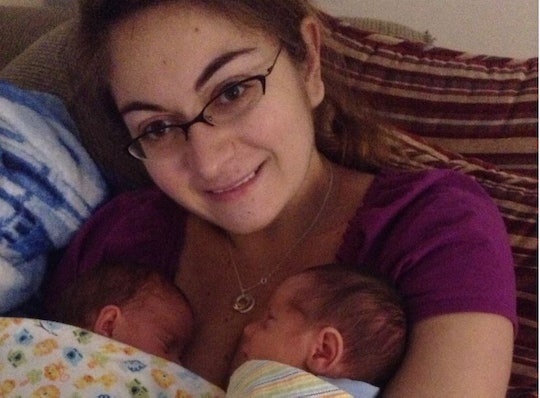 Lots of moms love to reminisce about the first thing they ate post-delivery. Some of them even refer to it as the best part about the aftermath of giving birth (aside from actually having the baby, of course). But for me, even though I hadn't eaten in almost two days, the best part of making it through delivery wasn't the first glorious postpartum meal. For me, the glorious reward after all my hard work in the delivery room and OR was finally getting to take a shower.

During the last two months of my pregnancy, I was on bedrest and in and out of the hospital quite a bit. Since staying off my feet was key to staying pregnant, I was limited to five-minute showers every other day while I sat on a shower chair. The chair part was lovely. But not having enough time to wash your hair and shave your legs wasn't as great.

Once my boys finally arrived, I was looking forward to spending some serious time in the shower. I even planned for the occasion when packing my hospital bag. I packed my loofah, my favorite face scrub, an expensive shampoo and conditioner that I only bust out on the weekends, and a nice new razor to defuzz myself.

During delivery, I became thoroughly gross. I only had contractions for about an hour before I demanded the epidural. Laying in bed watching House Hunters while I waited to dilate didn't make me too sweaty, but once it was game time I pushed my heart out for three hours. (If you don't think that's a long time, hold a crunch while watching Titanic from start to finish and get back to me.) After all that pushing, the twins still wouldn't budge and their heart rates had started to dip, so I had an emergency c-section, meaning I was coated from navel to nether region with all kinds of surgical disinfectant and other bodily fluids that I don't want to think about. I came out of delivery a very happy but very smelly new mom.

I didn't even care how uncomfortable it was to try and stand upright. I just wanted to remember what it felt like to be completely clean again, to stay under the spray so long that my fingers turned into raisins.

After I met my boys, got them settled in the NICU and had my first post-delivery check-up, I was given the all-clear to finally hop in the shower. Only it was more like a slow hobble/crawl, because my midsection was sore and covered in bandages that I was too afraid to look at. I didn't even care how uncomfortable it was to try and stand upright. I just wanted to remember what it felt like to be completely clean again, to stay under the spray so long that my fingers turned into raisins.

It was only a tiny shower stall with a flimsy plastic curtain and a detachable hose sprayer, but to me it looked like a luxury shower from the HGTV Dream Home. At first I turned the water to "barely warm" because I was so used to being pregnant and I had an irrational fear of boiling my babies in the womb if I took a too-hot shower. But when I looked down and was able to see the chipped remains of last season's manicure under my semi-deflated baby bump, I remembered I was all alone in there, and turned the heat up to "Ryan Gosling shirtless."

The next few minutes were straight out of an Herbal Essences commercial as I shampooed my hair and washed my face and upper body. I was slightly bummed when I realized the tan I thought I had going along my collarbone was actually just a ton of dead skin that needed to be scrubbed off, but I was enjoying the hot water too much to care.

I finally got started on the thing I was most looking forward to about showering post-delivery: shaving my legs for the first time in weeks.

Up until this point, I had been very careful to avoid soaking my incision or getting any soap on it, but I wanted to try and wash away some of the surgical stains and blood that I saw there, so I decided to give it a go. Injuries make me squeamish though, so I looked straight ahead while aiming my loofah southward. And I felt...nothing. I knew my sponge was pushing against my body, but there was no sensation in the lower half of my abdomen. For just a tiny fraction of a section, I wondered if I was a ghost. Then I realized it was a side effect of the surgery, and I was numb in my lower belly.

Then I finally got started on the thing I was most looking forward to about showering post-delivery: shaving my legs for the first time in weeks. Thanks to a handy in-shower bench, I was able to shave my entire left leg without pulling on my incision too much, including those hairs around the ankle that I usually miss. But when I switched to the other leg, I realized the shaving cream was coming away, but the hair was staying put. I looked at the razor and saw a baby rat's worth of hair caught among the blades. I tried to clean out the razor as best I could, but it was hopeless. My disposable lady BIC was no match for my natural coating, and I had to settle for being a half shorn mamma.

I emerged from that first post-delivery shower ready to take on the world. In the moment, I just wanted to wash away the labor sweat and grime, but in hindsight I'm really glad I didn't rush that shower. It's been almost four years since I gave birth, and I'm pretty sure that's the longest shower my kids have let me take since.