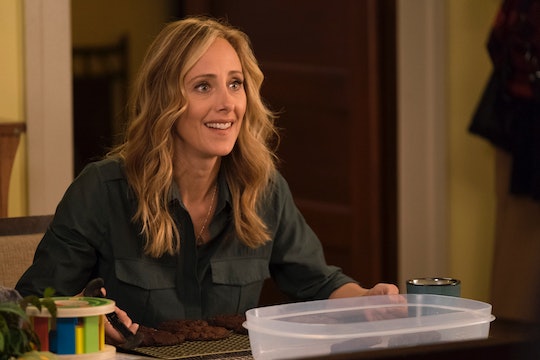 Grey’s Anatomy Season 15 has been all about the love triangles. Owen couldn’t seem to make up his mind between Teddy and Amelia and went back and forth between his feelings for each of them too many times to count. Finally, there might be some clarity in at least one part of that love triangle’s feelings because Teddy loves Owen on Grey’s Anatomy. This means there can finally be an end to the romance drama between Teddy, Amelia, and Owen, and they can finally coexist in a normal way at Grey Sloan Memorial Hospital.

In tonight’s episode, Teddy told Amelia that she loves Owen and has never felt the way she does about him with anyone else, including Koracick. That’s a kick in the gut for fans who hardcore shipped Teddy and Koracick’s drama-free relationship, but I don't think anyone ever expected Owen and Teddy to *not* find their way back to each other at some point. Now, Teddy just has to tell Owen before she gives birth and before he gets severely hurt in what might be a multi-car pileup in the Seattle fog. But it probably wouldn't be the end of a Grey’s Anatomy season without added pressure.

Last week, Owen came to the realization that he too loves someone, but he hasn't said yet who. He only told his therapist that he hopes "she" feels the same way about him. For the first time in years, Owen has real clarity about who he wants to be with and he is sure taking his time getting there in telling her, whoever she is.

Owen and Amelia have gotten a little closer lately and there is some uncertainty on Link’s part about his own relationship with Amelia, but I feel like that is all a red herring, meant to distract viewers from Teddy and Owen being endgame. We as viewers are likely meant to think that Owen could choose either Amelia or Teddy, but now that Teddy has made her own feelings clear, I can already see the two of them declaring their love for each other as they bond over their newborn.

I think there was a specific reason why Teddy told Amelia about her feelings for Owen before anyone else. After Teddy goes into active labor, she will probably tell Owen herself, but he might be worried that she is confused about her love for him because of the emotion of having his baby. Amelia can then step in and assure Owen that Teddy’s feelings are real, thereby giving her blessing in a way and effectively ending this God awful love triangle.

Grey’s Anatomy is all about making fans put in the time and work to get the perfect couples on-screen, so Teddy, Owen, and Amelia’s love triangle wasn't too surprising this season. It just dragged on a tad too long, if you ask me. Now that Teddy’s feelings are out in the open, Owen can hopefully profess his own love to her, and everyone can move on.

Once Teddy and Owen finally secure their relationship, it will be time for Amelia to either commit to Link or end things where they stand. She is about to be in the perfect place to start a real relationship with him, but they might need a little more time before they are there. Right now, they have a few issues to work through before they can be out and open about their relationship. The good news is that there will no longer be Amelia’s ongoing love triangle looming in the background and we can thank Shondaland for that.