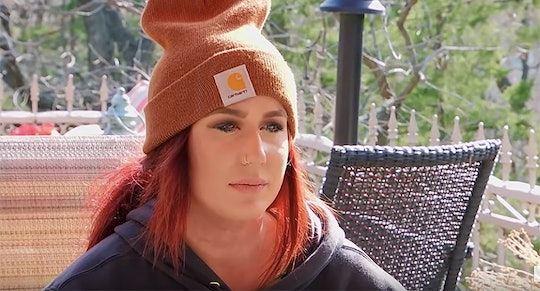 Teen Mom 2 star Chelsea Houska gave birth to her third child, a daughter named Layne, in August 2018, and although the birth was a happy occasion for her and her husband, Cole DeBoer, it also brought up difficult emotions for the mom of three. As it turns out, Chelsea Houska struggled with postpartum anxiety after each delivery, which she revealed on Instagram earlier this week.

During Monday, Feb. 11's episode of Teen Mom 2, Houska delivered Layne without any complications. And shortly before the birth, Houska teased DeBoer about going into labor on her own birthday, Aug. 29. “Did you do this on purpose so I could have her on my birthday?” Houska teased DeBoer, to which he replied, according to People, “What?” She then responded, “Give me a baby.” An ecstatic DeBoer replied back, “Yeah! It’s a good gift," adding, “Gonna be just as amazing as you are.” Aww.

While Houska's birthday was filled with cute banter and joy, the period after Layne's birth wasn't as smooth. As Houska shared on Instagram, she suffers from postpartum anxiety, a condition she also endured after welcoming 2-year-old Watson and 9-year-old Aubree into the world.

This admission came to light after Houska recently responded to a fan's comment on Instagram, which said: "Why don't you ever let family babysit? that seems odd. If you [have] family willing to babysit, you should do as many dates as possible."

Though she certainly didn't have to respond to this comment, Houska did, setting the record straight with this honest answer:

After giving birth, I personally go through a period of what I would say is pretty severe postpartum anxiety (it was by far the worst after having Watson) … for me, leaving them to go out just causes a lot of stress and anxiety. But we are trying to make it a point to get out on dates more! We are very grateful to have help from family members when we need it!

Houska's admission makes sense when you consider past comments she has made about date nights with DeBoer. When asked in October 2018, for instance, if she uses babysitters, Houska replied in an Instagram Story: "Heck no lol we JUST barely even started letting our parents watch Watson for a couple hours."

Although it's completely normal to worry about your newborn baby, new parents should speak with their doctor if their thoughts are irrational or prevent them from performing everyday activities.

After Houska brought up her struggle with postpartum anxiety, many fans took to Reddit to share their own stories. And as it turns out, many parents struggle with this condition.

"I have this currently. I check on my son frequently through the night to the point where I have a hard time falling asleep in his little 3 hour stretches between feedings," one person shared. "And it isn’t just about him either. Last night I got so paranoid that the fan (used for white noise) in my one year old son’s room was going to start on fire that I got up at 2:30 am and turned it off. I’m checking on him via the monitor just as frequently as I’m checking on my 12 day old son."

Another wrote, "I had such terrible PPA when my daughter was born... When she would sleep I would just watch her with my hand on her chest making sure she didn't stop breathing. I was terrified of SIDS and was like a zombie for at least 6 months, because I never slept."

"I had it so bad with my youngest," one more shared. "He's 4 months now, and it's died down, but for weeks I wouldn't let him out of my sight let alone home."

It looks like Houska's comment has spurred an important conversation, and it's refreshing to see this much-needed awareness brought up.

Hopefully, parents who are struggling were able to find comfort in hearing about Houska's experience and others' personal stories about postpartum anxiety. Because it is common and you're certainly not alone.