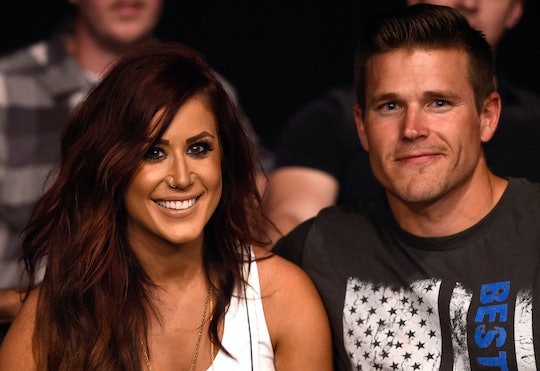 MTV's Teen Mom family will soon grow by one more now that Chelsea Houska has revealed she's pregnant with her fourth child. The reality star shared the exciting news on Instagram with a cute and rustic announcement.

"One More DeBoer!" Houska captioned a photo of her family's names as well as "Baby" and a heart written on a wooden beam shared on Instagram. "Coming early 2021." Houska's pregnancy announcement comes just days after Teen Mom 2's Kailyn Lowry revealed that she gave birth to her fourth child on July 30.

"We are expecting baby number four!," Houska told MTV News in a statement. "Everything's been going very smooth, and baby is doing good. Everyone is very excited."

DeBoer also posted the same photo on his Instagram, writing in the caption that this baby will be "The Grand Finale (We Think)."

The couple is currently building their own farmhouse together. In a post on their shared Instagram account documenting the process, they revealed that the writing from their announcement is now a permanent part of their family home. "When we were writing blessings on the house before the drywall went up, we wrote all of our names and couldn't leave out the new babe," Houska wrote.

Houska did not share many details about her pregnancy like how far along she is beyond that she's due in early 2021, if they know the sex of their baby, or if they have come up with any baby names. But she did take to her Instagram Story where she thanked her followers for their well wishes. "I'm so excited to share this whole process with you," she said. "I swear, I already have a bump but I'm really early. But I guess when it's the fourth baby, it's popping in every way."

Houska told MTV News that this pregnancy has been different from her previous ones and this baby will likely their last. "This has definitely been the most 'pregnant' I've ever felt, like, the most classic pregnancy symptoms with this one," she said. "This is most likely our last baby, so we joke that this one is making it a little harder — making me a little sicker so that we are OK with being done after this one!"