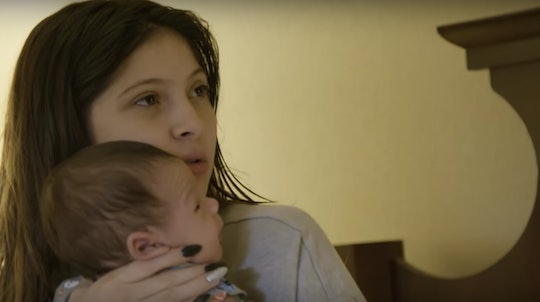 MTV's newest Teen Mom spinoff, Young & Pregnant, is full of interesting young women. But one, Brianna Jaramillo, has a particularly compelling life story that viewers don't often get to see on television. Jaramillo's story arc on the show will cover her relationship with her transgender boyfriend, who is not the father of her child, and the realities of raising a son with a disability. She's a fan favorite on the show, and photos of Teen Mom's Brianna Jaramillo's son, along with the rest of the people in her life, are proof that she leads a fulfilling and busy life.

Jaramillo got pregnant when she was 17 years old with a young man that decided to not be in the child's life, according to her introduction video for the MTV show. Her son, who is 6 months old now, was born with a congenital anomaly that caused him to be born without an arm or hand, according to Kid's Health. Jaramillo doesn't specify what exactly little Braeson was diagnosed with, but it's generally considered pretty rare and develops early on in the pregnancy, according to Kid's Health.

Jaramillo told People of her son's condition, “It was definitely hard hearing about it and realizing he might grow up and realize that he’s different from everybody else. That was definitely hard... He’s going to adjust to living with it because he was born with it. It’s not like he had an arm and lost it. He’s going to learn to do everything that we do but without it."

Jaramillo's story is certain to touch viewers perhaps more than any of the other four cast members. And, to give you a peek at that, here are some sweet pic of her and baby Braeson.

Jaramillo gives birth to her son in the last episode, so this was one of the first times fans got to see him on her social media account.

Every guy needs a good hat for the summertime, right?

Babies are the best at setting up a Boomerang shot from the crib.

He's Got A Lot Of Love

Although it doesn't look like she and Danae are still together right (or at least that's how it seems on social media right now), this photos makes it seem like she's found some peace.

How can you not adore this face?

Um, Braeson and his mom are definitely having a better summer than everyone else.

One Step At A Time

Braeson already seems to be getting a hang of this crawling thing.

Although she and Danae are on again, off again throughout the course of the show, it doesn't seem like they are together anymore given some of the captions and body language in the Instagram photos featuring an unnamed man. But that doesn't mean that Danae doesn't want to be involved in Braeson's life. The infant is an amalgam of both of their names, with the "BR" from Brianna and the "AE" from Danae, according to Reality Tea. In a clip from the show, Jaramillo also explained that she, Braeson, and Danae will always be family, so hopefully whoever may enter their lives will get along with everyone for the sake of co-parenting.

Danae said in the premiere, according to Starcasm, that he thinks he can be a good role model for their baby. According to Starcasm, he explained: “I feel like we are connected, like, way more because of his arm and me being trans. Like, I could help him and show him that…there’s so much more to this world than people who are judgey.”

The couple really relied on each other during the pregnancy and in Braeson's early days, which is something that Jaramillo definitely needed. She explained in her introduction video, "At our last ultrasound, they said that they cannot find his left forearm and hand. It was something that made me really sad because the first thing I could thing about was that one day this child is going to look up, and he’s going to be, like, ‘Mom, why am I different?'”

Being the young mother to a child with a disability might not seem like the easiest thing in the world, but judging from Brianna Jaramillo's photos of her son, she's got this mom thing down.