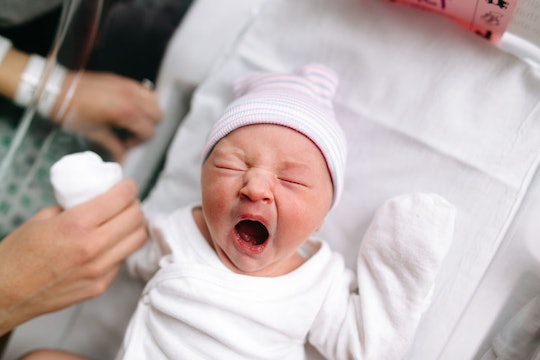 It's the kind of story that seems too impossible to be true. A young girl goes to the hospital with a headache... and four days later, she's a mother. She had no idea that she was pregnant. Not a single symptom, no weight gain, no change in her menstrual cycle. Nothing. This might sound like something from a retro daytime talk show, but it's the shocking reality for Ebony Stevenson: A teen girl who gave birth in a coma, all because of a little-known condition called uterus didelphys.

British teenager Ebony was rushed to an emergency room in the Greater Manchester area on Dec. 2 of last year after falling ill at home. The college student, who is studying sports physiotherapy, had suddenly started having a number of seizures and doctors were struggling to figure out what was wrong, as per The New York Post. She was placed in a medically-induced coma for four days, discovered she had preeclampsia (a condition affecting pregnant women) and contacted her mother to let her know a baby was on the way and needed to be delivered immediately. Ebony woke up on Dec. 6 to find she was a mother, which was beyond shocking to her because she had never experienced any pregnancy symptoms; even her period had been continuing normally. Doctors discovered Ebony has something called uterus didelphys, which means she actually has two uteruses. One carried the baby unbeknownst to her while the other was going about business as usual.

About one out of every 3,000 women are born with uterus didelphys, a condition where a woman is born with two uteruses, two cervixes, and in some cases even two vaginas. Unfortunately scientists have yet to pinpoint why some women have this condition and others don't so it's difficult to offer insight as to who might be at a higher risk, as per Cosmopolitan. And as Ebony Stevenson discovered, women can also live with uterus didelphys for an extended period without presenting a lot of side effects.

In Ebony's case, her second uterus is closer to her back, which was why she hadn't developed a more typical "baby bump." Her daughter, named Elodie, might have been a complete surprise to the family but she appears to be quite a happy one. As Ebony told The New York Post:

Meeting my baby was so surreal. It felt like an out-of-body experience. I worried I wouldn’t bond with my daughter because I had no time to get my head around her arrival, but I think she’s amazing.

Ebony Stevenson is one incredible woman, in my opinion. Not simply because she managed to carry a baby full term in her second uterus without realizing, of course, but because she reacted to such a massive surprise with so much maturity. She had no plans to be a mother, clearly, and yet her daughter arrived and she is so amazed by her she calls her a "little miracle."

If that's not an impressive woman, I don't know who is.

More Like This
40 Fantastical Boy Names That Start With “F”
7 Surprising Old Wives' Tales About Christmas Eve Babies
40 Lovely, Lively, Lavish Girls Names That Begin With “L”
Here’s What It Means If You Give Birth During A Solar Eclipse