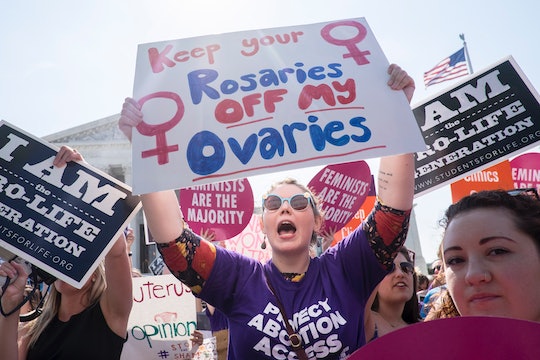 Women May Have To Buy “Rape Insurance” In Texas Soon, & Yep, You Read That Right

This week, the Texas House of Representatives approved a bill that would ban insurance companies from covering abortions. Considering that many plans already don't cover abortions, the Texas bill will require "rape insurance," as some of the Democratic state legislators call it. That sounds extreme, but the bill, which passed in the Texas House on Wednesday and will go up for debate in the state's Senate this month, reportedly requires women to purchase a separate insurance plan if they want to get a non-emergency abortion.

That's simply impractical. For one, it's all but impossible to quickly get insurance coverage on the fly and not all women plan on having to have an abortion. According to The Texas Tribune, Texas House Representative Chris Turner said during the debate:

Women don’t plan to be raped. Parents don’t plan for their children to be victims of incest. Asking a woman or a parent to foresee something like that and buy supplemental insurance to cover that horrific possibility is not only ridiculous, it is cruel.

The bill passed in the House despite Democrats' efforts to put in exceptions for rape or incest, but Texas Republicans weren't having it. The bill was passed 92-46 and moves onto the state's senate, which has already passed a similar bill.

On the other hand, some Texas Democrats fought the bill simply because it seemed like a political stunt. Texas Rep. Donna Howard said, "What you are trying to prevent doesn’t exist." She's right. If Texas women have employer based coverage, an abortion could be covered. But already, the state bans any one on Medicaid or federal insurance plans (like postal workers or military personnel) from having abortions covered.

In addition to that, because of the Hyde Amendment, no federal funding ever goes to any insurance coverage or facility that provides abortion care. Although Texas Republicans pushed the bill through on the premise that people with objections to abortion shouldn't have to pay for abortion — that's not happening. Pushing this bill through appears to be yet another way to politicize when and how women access vital health care.

It's already hard for Texas women to get an abortion. Women are presented with materials informing them of the unproven link between abortions and breast cancer and are forced to endure a transvaginal ultrasound and 24-hour waiting period. The state is in seemingly endless battles with Planned Parenthood, which it has already effectively "defunded" — meaning there are already little to no options for lower income women who need an abortion.

Last year, the Supreme Court ruled in Whole Woman's Health v. Hellerstedt, which shut down some restrictions on abortion providers. But that doesn't mean that Texas legislators have given up the fight to make getting an abortion as difficult as possible for women, even going as far as to introduce a bill that would require women to pay for burial services for their terminated pregnancy.

Since insurers already don't favor women and abortion coverage, this new Texas bill is just another sign that its state legislators aren't concerned about the health of women, or all of the legal fees it takes to combat Planned Parenthood, the American Civil Liberties Union, or any organization that challenges attacks on women's access to safe and affordable abortion.

Instead, the state legislator seems more interested in policing women's bodies, at any cost, which means women and allies will just have to fight harder to protect their right to accessible abortions.