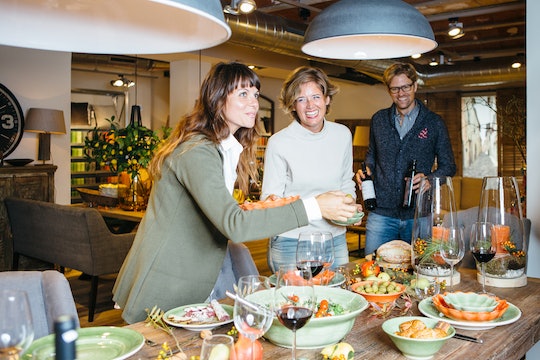 Thanksgiving Is During Mercury Retrograde This Year, So Be Prepared For Drama

The holidays are a strenuous time of year. Not only are there huge meals to coordinate and celebrations to plan, but you've got to deal with all of the interpersonal dynamics that come into play when families get together after a protracted period without much interaction. This year, you might want to prepare for those dynamics to be even more fraught with tension or confusion, because Thanksgiving happens during Mercury retrograde.

Astrologists like those from Astrology Zone posit that when Mercury goes into retrograde, all of the energy from that retrograde motion causes communication problems — not just between people, but with electronic devices, analog messaging, and any other means of correspondence. (Carrier pigeon, anyone?) That means that during a big to-do like a Thanksgiving party, any number of things can go wrong. It could be something as simple as accidentally leaving someone off of a group text to something as catastrophic as a turkey order being lost. It could also go deeper than that, according to astrologists: It might mean a real misunderstanding between loved ones because the affected parties are simply unable to find the right words to get their point across without hurting feelings. It's a real quandary that this is happening right now, for sure.

When Mercury goes into retrograde, astrologists believe that the energy expelled from the process causes specific problems down here on earth. The way that EarthSky explains it is that the planet is not actually heading backwards in its orbit; it simply appears that way to observers on earth. It is essentially an optical illusion that happens as the earth and planets orbits around the sun. Although, experts do note that if you were to observe these and similar processes from the surfaces of other planets, you'd likely be even more confused, and heavens know what that would do to your conversations with Uncle Morty.

However, these beliefs were formed before Copernicus and Kepler figured out that the Earth and the planets in our galaxy revolve around the Sun. Even though we now know that the planets and sun don't revolve around the Earth, those opinions hold fast. And astrologists observe the change in dynamics and disruption in communication as a response to the perceived shift in direction of the planets.

Anyone who celebrates Thanksgiving will tell you that even a tiny amount of miscommunication can lead to a huge amount of frustration, and according to Dark Star Astrology, that's exactly what you can expect beginning November 17.

This year, as Mercury retrograde occurs, I will be with family that I do not necessarily agree with on, well, basically anything. They're conservative where I'm progressive. They live in a small town, I love living in Brooklyn. It could get stressful if there's a breakdown in communication. Since we're leaving as Mercury begins retrograde I should also be concerned with our travel plans being disrupted and our trip derailed, according to The Old Farmer's Almanac.

Apparently, those interactions are believed to have a possible negative impact on your life today, which adds an entirely new dimension to the party. "I'm sorry, Aunt Linda, that I was a jerk to you back in Ancient Rome. It was really wrong of me, but that doesn't excuse you bringing fruitcake when you were assigned apple pie. They're not the same."

All that I know is that I am going to tread lightly and double check every reservation and every credit card, and make sure I have plenty of extra chargers. Because when Thanksgiving happens during Mercury retrograde, you need to be prepared for anything.