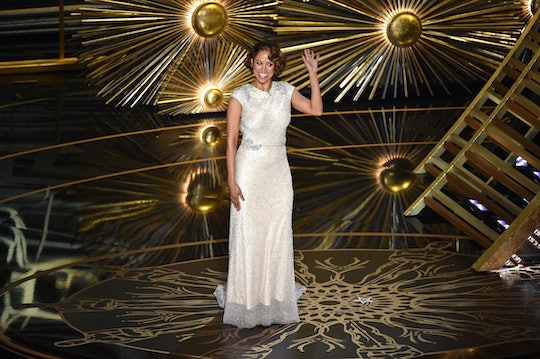 This year's Academy Awards were nothing if not interesting. There we were, all catching our breath after Chris Rock's epic monologue at this year's Oscars. All of the white people were like, "Phew, OK. Now we can go back to having fun, right?" And then here comes Stacy Dash. Looking (let's all be fair here, folks) very beautiful. And delivering that awkward Stacy Dash moment that is confusing Twitter to no end.

A little background here for you: I'm sure you've all heard of #OscarsSoWhite, the famous hashtag movement brought about in protest against the lack of diversity at the 88th Academy Awards. This year's Oscars host, comedian Chris Rock, certainly made short work of the diversity issue in his Oscar monologue. He called out Hollywood racism, sexism, and even threw a little shade on Jada Pinkett Smith, who boycotted the Oscars this year.

Then out comes Stacy Dash. Many of us remember Dash from her role in Clueless, both the movies and the TV series, as well as more made-for-TV movies in the last 20 years than you could poke a stick at. And oh yes, I should also mention she is a news anchor for Fox News.

Lately, Dash has been back in the news for speaking out against Black History Month and BET. When she was a guest on Fox and Friends, she argued that black actors complaining about a lack of diversity shouldn't have awards centered around black artists. "We have to make up our minds; either we want to have segregation or integration," she said. "If we don't want segregation, then we need to get rid of channels like BET [Black Entertainment Television] and the BET Awards, and the [NAACP] Image Awards, where you're only awarded if you're black."

And then the Oscars happened.

Dash was introduced by Rock as the "director of our new minority outreach program" and came out giggling. Like, real awko-taco giggling. Like there was some joke we all should have been on and we missed it. She came out from the shadows, barely able to get her announcement out. "I can't wait to help my people out! Happy Black History Month!" And just like that, she was gone.

So was she in on the joke? Did she know she sort of was the joke, to Chris Rock at least anyhow? Some say yes.

Others were a little surprised that Dash was at the Oscars... but others weren't.

But mostly, this sums up the general feeling.

I'm sure Stacey Dash knew she was supposed to be part of the joke. She had to. Then again, anything is possible.