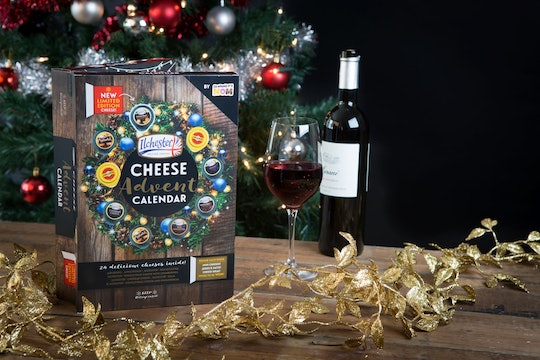 So Wrong It's Nom

Christmas junkies everywhere, take note: A new Advent calendar is on the market and people are losing their minds. Target has announced that this holiday season it will be carrying a groundbreaking little countdown to Christmas made of, wait for it, cheese. Not that the kind with 24 chocolates in all the little windows isn't awesome, but nothing says "adulting" quite like the sophistication of a cheese Advent calendar.

The idea was first developed and sold last year by British food blogger Annem Hobson at So Wrong It's Nom, where it quickly went viral. The seasonal product was such a smash hit that people around the world were woefully lamenting the fact that it was only sold in U.K. stores. In response to the unexpected popularity, Hobson partnered with British cheese manufacturer Norseland to bring her miracle creation to the States, and Pop Sugar has reported that the good people at Norseland are the ones we have to thank for the availability of the cheese Advent calendar in Target stores.

People magazine recently featured the in-demand product, noting that it contains 24 individually wrapped cheeses, must be refrigerated, and has a book-like design. The $20 product is pretty affordable, but heads up: this unique Advent calendar will only be available in 247 Target stores nationwide.

Wondering if you'll rip open the packaging only to find little mild cheddar and mozzarella cubes? Not even close. Pull out your wine glasses for this revamped holiday ritual, because cheese specialists Jarsleberg, Applewood, Mexicana, and Ilchester all participated in the creation of this baby and it is the real deal. According to Mashable, the Advent calendar includes cheeses like Red Leicester, Mature Cheddar, and Wensleydale with cranberries. Needless to say, this is not your kindergartener's Advent calendar. This countdown to Christmas is strictly for foodies. Cabernet, anyone?

So where did the tradition of the Advent calendar come from? While Advent is commercially seen as a way to build up the anticipation for Christmas Day, and is a marketing company's dream, its history actually goes back 1600 years in Christian tradition.

As Time magazine explained, Christians originally fasted and prayed during the Advent season to prepare themselves for Christmas. Many faith traditions still keep the four weeks of Advent — beginning on the fourth Sunday before Christmas, not necessarily on Dec. 1 — as a time of reflection, prayer, and self-examination.

Its quite the leap to go from seriously examining your conscience to partaking of a fancy schmancy countdown to Christmas Day, but hey, who says you can't do both? Whether you are religious or not, Target's cheese Advent calendar is definitely a highbrow way to jump into the spirit of the season. I feel more cultured just writing about it.

If you're vegan or avoid dairy, you will obviously want to pass on this particular December treat, but the product is suitable for vegetarians. But before you shove your feet into your boots and run to the nearest Target, I have to break it to you that the cheese Advent calendar won't hit those red and white shelves until November.