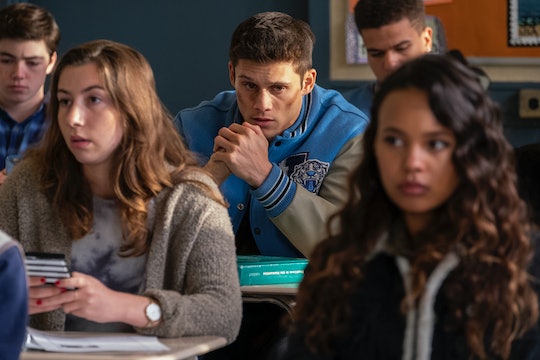 Bryce (Justin Prentice) is dead in the new season of 13 Reasons Why, which drops on Netflix on Aug. 23, and the 13 Reasons Why Season 3 trailer shows that everyone is a suspect. When the first Season 3 trailer was released at the beginning of August, Bryce’s murder was announced and there was a hint that more than one character could have had a hand in what happened to him. Now, the final trailer for the season shows that not only are Tyler (Devin Druid) and Montgomery (Timothy Granaderos) suspects, but Clay (Dylan Minnette) of all people is too.

At the end of Season 2, Tyler showed up at the school dance armed with a gun and seemingly prepared to hurt some of his classmates. He had endured excessive bullying over the course of the school year and after he went from having a close knit group of friends to being virtually alone in his struggles with the top dogs at Liberty High, he was brutally assaulted by Montgomery in the school bathroom.

In the end, Clay managed to stop Tyler from hurting anyone at school and Tony (Christian Navarro) got Tyler away from the dance before the police showed up.

Judging by the Season 3 trailer, no one was hurt and no one got in trouble for Tyler’s would-be crime in the Season 2 finale, but Bryce was killed by someone and right now, anyone could go down for his murder.

The 13 Reasons Why Season 3 trailer starts off by showing how all of the students receive the news that Bryce was found dead. Instead of looking torn up about it, however, everyone looks either guilty or suspicious of the others. Both Justin and Zach (Ross Butler) have bruises on their faces, which makes it seem like they had a fight with each other or someone else over something leading up to Bryce’s death. And in another scene, Zach points the blame at Tyler, who is confronted by Montgomery for reasons unknown right now.

It’s clear that most of the kids still have something to hide, but chances are, it’s not all linked to Bryce directly. If one of the other kids at the school did kill him, Season 3 will probably make them all out to be suspects before they are cleared one by one and the actual killer is revealed.

The trailer also shows a new student, who tells detectives that Jessica (Alisha Boe) had more reasons to kill Bryce than anyone else. And at one point, Clay is arrested, or at least taken into custody, for questioning about the murder. From what viewers know about Clay, he isn't capable of something like this. I don't think he did anything drastic, but since he always seems to be at the center of tragedy, he could have information he’s not willing to give up. At the very least, he was the last person to have Tyler’s gun in his possession and I don't think that’s a good sign for him.

Given Bryce’s track record with most of his fellow classmates and teammates, almost everyone has a motive for wanting him dead. I don't think it's going to be as easy as pointing a finger at someone like Tyler or Justin and being done with it, though. It looks like Season 3 is going to dive deep into how these teens’ lives intersect even further and who might have had the biggest motive and drive to commit actual murder.