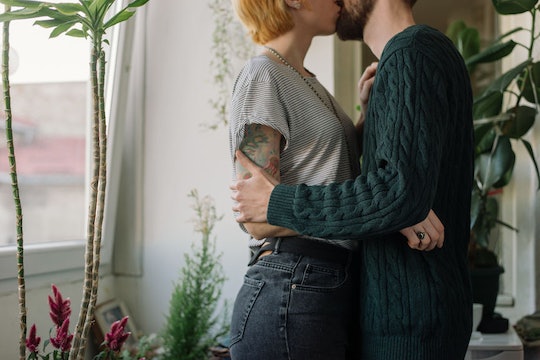 The 3 Best Sex Positions To Conceive A Boy, Or So The Old Wives Say

If you've always dreamed of having a little girl or a little boy, it can be tough to let go of the fantasy. Sure, the most important thing is that your baby is born healthy, but you're only human. So is it really so outrageous that some people will try just about anything to influence the gender of their child? Unfortunately, there's not much you can do that doesn't involve thousands of dollars of medical procedures when it comes down to it... but if there were sex positions to conceive a boy, you'd definitely give them a shot, right? Even if technically the only "proof" of their effectiveness came from old wives' tales?

As the author of How to Choose the Sex of Your Baby, Dr. Landrum Shettles has been considered an authority on, well, choosing the sex of your baby for over 25 years, according to Popsugar. Following his landmark "Shettles method," Dr. Shettles claimed, would give parents-to-be a 75 percent chance of "having a child of the desired sex." Now, it should be noted here that there is no scientific evidence to back the doctor's claims. However, because there are still those who swear his method works, this info is worth sharing as a hey, why not?sort of suggestion... if not a this is 100 percent getting you a son directive.

Anyway, getting back to Shettles and his theories, his idea was that "boy sperm" (sperm carrying a Y chromosome) is weaker, smaller and faster than girl sperm (sperm carrying an X chromosome), and, as such, sex positions allowing for deep penetration give boy sperm a better chance of making it to the egg before the girl sperm.

To someone without any scientific expertise such as myself, this sounds like a logical enough approach. But, again, there is that small matter of there being absolutely no scientific evidence that this is true... and the fact that most experts dismiss the theory that a baby's gender can even be influenced (outside of a lab).

"It’s a myth, your chances are about 50/50 for either gender baby if the pregnancy happens through intercourse," reproductive endocrinology and infertility specialist Dr. Vitaly A. Kushnir with Neway Fertility in NYC tells Romper.

In vitro fertilization (IVF) with preimplantation genetic testing (PGT) is "the most reliable way to select the sex of the baby," he says, and while that's obviously true, it's also obviously out of the question for anyone struggling with fertility issues who doesn't have a spare $20,000 or lying around.

So as long as you go into the process with the knowledge that there are no guarantees, it can't hurt to take a page from Dr. Shettles and the old wives and give the following positions a whirl.

Remember how male sperm are speedy but not so strong? "Sexual positions that provide deeper penetration, like doggy style, give the faster, male Y sperm a head start farther away from the more acidic entrance of the vagina," according to Parenting.

"Although not backed by science, some experts believe the faster boy sperm swim better against gravity," reported Popsugar. It's not always the easiest position to master, but walls help. Plus, if sex-while-standing isn't already part of your repertoire, this is a good excuse to experiment. (If standing up is too much of a challenge, you can also try straddling your partner to the same effect.)

3. Any position that makes you orgasm

And I'm not talking about "you guys" when I say "you" — I mean you, lady. That's because, as SheKnows reported, any position that makes you orgasm will cause your vagina to become more alkaline, and this "shift in pH balance majorly favors male sperm."

So, no guarantees... but certainly nothing to lose, either. And maybe a boy in the bargain! (Though any baby at all would do, of course.)

More Like This
Are Boy Babies Usually Late? Signs Your Baby May Be Born Late
25 Baby Girl Names That Begin With D
Are You Leaking Amniotic Fluid Or Is It Normal Discharge? Experts Explain
What Does Amniotic Fluid Smell Like? A Nurse Explains