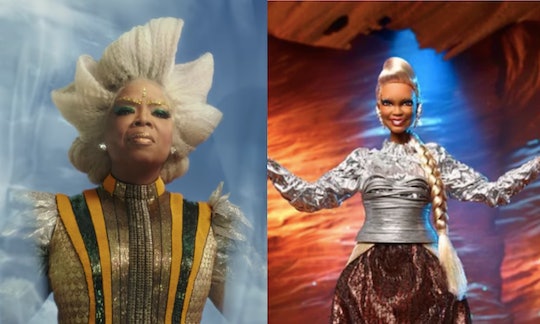 The ‘A Wrinkle In Time’ Barbies Are Here, & They're *GORGEOUS*

A Wrinkle In Time fans are going to want to sit down for this one. On Wednesday, the director of the book's movie adaptation, Ava DuVernay, revealed that A Wrinkle In Time Barbies are now a thing. Yep, the Barbie universe is stepping up its game with dolls in the likeness of characters portrayed by Oprah Winfrey, Reese Witherspoon, and Mindy Kaling, and each one is absolutely gorgeous.

In less than two months, on March 9, Wrinkle In Time will hit theaters across the United States. And in anticipation of the movie's premiere, some genius at Mattel decided to create a line of Barbies after the characters Mrs. Which (Winfrey), Mrs. Whatsit (Witherspoon) and Mrs. Who (Kaling). Although Mattel's website doesn't yet say when the barbies will be available, what's clear is this: The dolls are beyond stunning.

But what's especially great about this line is that it's another big step forward for Mattel in terms of diversity. DuVernay, who is clearly thrilled with the Barbies, pointed out this very important bonus when she shared the news with fans via Twitter.

When Disney makes Barbies of your movie’s characters and you just want to stare at them all day in disbelief because you loved Barbies as a girl but never had any like these #WrinkleinTime.

Isn't DuVernay's message incredibly moving? One can imagine DuVernay is especially touched because she was recently honored with a Barbie doll of her own in 2015, according to MTV. DuVernay's doll, which was given to her through the Shero campaign, a movement that honors impressive and groundbreaking women from a variety of backgrounds, comes complete with a director's chair and a sleek black turtleneck that screams I mean business. It's a really cool doll, to say the least. Not to mention, it's pretty impressive that DuVernay has inspired the creation of so many barbies throughout her career.

As for the finer details about the Barbies, they will retail for $50 each, according to Entertainment Weekly. Although this might seem like a hefty price (too rich for my blood), it's a safe bet they're on the pricier side because they're marketed to the "adult collector," according to Newsweek.

While I think these Barbies are perfectly fine for kids too, I understand why Mattel is labeling them as adult collectibles. For starters, the details on each doll are jaw-dropping, all the way from their gowns to their Wrinkle In Time inspired accessories. I could marvel at these beautiful creations for hours, to be honest. There's just so much to look at.

So, considering how finely-crafted these Barbies are, I'm not shocked about the "for adults" thing. It's no secret that kids like to, ahem, alter their barbies' appearances on occasion.

You'll understand what I mean when you check out the incredible shots of each Barbie below:

Although Kaling, Witherspoon, and Winfrey have yet to speak out on the dolls (c'mon guys, I need to know your thoughts), the internet is abuzz with excitement and pure glee. From thrilled tweets about Winfrey in Barbie form to heartfelt messages about diversity, people are totally here for the Wrinkle In Time collection:

And Storm Reid, the star of Wrinkle In Time (aka Meg Murry) had this to say about the barbies:

Well-said, Reid. Incredible, strong, and fierce are perfect adjectives to describe these dolls.

And on a personal note, my favorite Barbie is Kaling's. I think I'm drawn to it because Kaling recently gave birth to her daughter, Katherine, and I like the idea that Katherine could play with her mom's doll one day. Ah!

So, fingers crossed Mattel lets consumers know sooner than later when these *beautiful* Barbies will be available. Wrinkle In Time fans need them, stat.