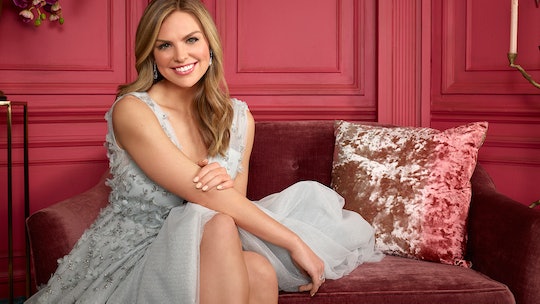 Hey, Hi, Hello — We Need To Talk About 'The Bachelorette's Hannah & That Promo

After 16 years and 15 seasons, The Bachelorette hasn't exactly been hailed as a show for feminists. There are plenty of valid arguments in regards to the reality show's perpetuation of toxic masculinity and sexists tropes. But following the 84-minute premiere and The Bachelorette promo trailer for the season, it certainly feels like Hannah Brown's version of The Bachelorette is attempting to be more progressive.

In the Season 15 premiere on May 13, The Bachelorette started off like any other — fun introductions, cheesy pick-up lines, and of course, men who are "here for the right reasons." But as the night continued, so did the drama. Courtesy of the best gal pals, Demi Burnett and Katie Morton, one of the guys, Scott, still had a girlfriend. Yikes. But what happened next was surprisingly refreshing. Hannah asked Scott about the situation and when the contestant sort of mumbled that he had a girlfriend on "Monday," Hannah wasted no time and sent him packing.

There are two things viewers learned from this scene — Hannah is not on The Bachelorette to play games and she is in total control this season. The former beauty queen contestant went directly to the source. She stood her ground when Scott made excuses. She made sure her voice was heard, even when he tried to interrupt. This is Hannah's show and I actually believe that she's the one in charge. And TBH, I'm here for it.

When ABC released The Bachelorette full season promo, I was stunned. In the trailer, there are clips of what's to come in the upcoming season. However, it's abundantly clear that this isn't Colton Underwood's season of The Bachelor. Sandwiched between shots are small snippets featuring sexual references, and at the end of the video, Hannah admits to having sex. While The Bachelorette is notorious for creating misleading trailers, it definitely seems like Hannah is being judged by one of her contestants.

In the scene, Hannah tells off her mystery man. "I can't believe you said that to me," she said. "I don't owe you anything at this point. Do you not understand that?"

The trailer then jumps to a clip of Hannah speaking to producers. "You don't own me," Hannah said. "You don't get to decide what I can and can't do because first of all, you're not my husband and even my husband, the person I'm going to be with, is going to allow me to be my own person."

But what stuck out to fans the most was what Hannah revealed next. "I'm having physical relationships and honestly, I have had sex and Jesus still loves me," she said. "How dare I be judged by a man?"

Quite frankly, I'm a little conflicted with Hannah's season of The Bachelorette so far. I applaud Hannah for speaking up about her sexuality and apologetically owning it on national television. I applaud her for speaking her truth and being true to herself to get what she wants. She knows her worth and at the end of the day, the upcoming season looks bold, empowering, and approachable.

That being said, I know that The Bachelor franchise thrives on a new narrative every season. And while Hannah's personality on The Bachelorette seems genuine, it's also clear that the "relatable feminist" is the angle producers are playing with this season. So essentially, the network is capitalizing on Hannah's authenticity, which feels like a contradiction in itself.

Regardless of how you feel about ABC's promotional take on Hannah's season of The Bachelorette, you can't deny her charm and boldness on the reality series thus far as well as the power she has this season. And despite any potentially problematic blips there may be later this season, it's been refreshing to see Hannah take charge of her own narrative in a progressive way. Nonetheless, the show is still a far cry from the feminist triumph it was never meant to be. I'm aware and to be blunt, you should too. So happy watching, Bachelor Nation, and as Hannah would say, Roll Tide.

The Bachelorette airs Mondays on ABC.