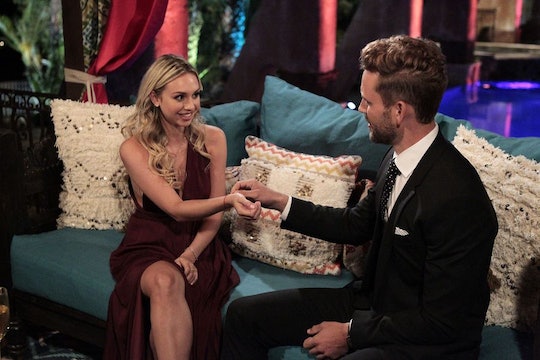 The Backstreet Boys Are Coming To ‘The Bachelor’

Every season on The Bachelor, the cast takes trips all over to maintain the attention of the millions of viewers who follow the love triangles, squares, and every other multi-sided shape. For Season 21, the Backstreet Boys will cameo on The Bachelor and it's partly for a competition for the women to gain some time (and a kiss) from Nick Viall. At the end of the season premiere of The Bachelor, there was an extended promo for the remainder of the season, during which there were plenty of kisses, some topless moments (ahem, Corinne), a well-placed slap that is obviously part of something else, and an appearance from the Backstreet Boys. They might not be any real competition for Nick, but what 20 and 30-something woman doesn't get all fan girly at the thought of being on-stage with their childhood crushes, right?

According to Us Weekly, the appearance of the Backstreet Boys on The Bachelor is all part of a competition where the women get to spend a half hour with the boy band learning a dance routine to then perform for Nick. (You know, the terrifying and unrealistic challenges that the show is known for.) But the prize for the best routine performance, judged by the Backstreet Boys themselves, is a dance with Nick to a live rendition of "I Want It That Way." So maybe it ends up being worth making a fool of yourself?

The competition during Season 21 of The Bachelor goes along with the iHeartRadio Theater concert of the boy band that Nick and his ladies get to attend (of course) and during which Nick gets to go on-stage during one of the Backstreet Boys' songs. During a slower version of "I Want It That Way", Nick then takes his winning lady out on the stage and slow dances with her in front of the entire audience, which is a lot smaller than the viewing audience, but when it's live and in person, that makes things a little more nerve wracking. When it's all said and done, though, Nick looks like he can hold his own on stage with the Backstreet Boys.

It certainly helps, though, that he began Season 21 with 30 women who already adore him. Season 21 started off with the usual types of strange characters ready to make their mark in weird costumes or with awkward gimmicks, but there will likely be no shortage of the juicy drama that The Bachelor is known and loved for. And with a BSB cameo on the way, it's sure to make the whole journey even more satisfying.