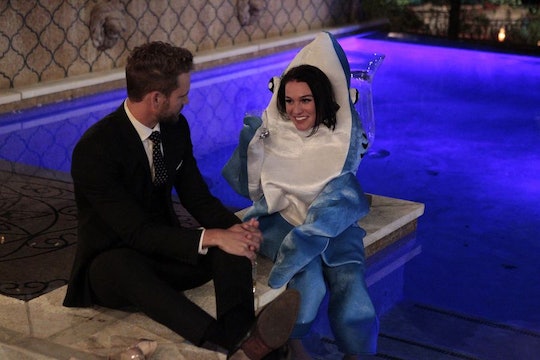 Every season has one. The contestant who shows up with a big display, which makes them stand out as a possible winner on The Bachelor or The Bachelorette. And on the Season 21 premiere of The Bachelor, Nick Viall has Shark Girl, the contestant who was dressed up in an obvious shark costume, though she insisted throughout the entire episode that she was a dolphin. It's OK, no one faults you, girl. But, it's still totally a shark. So who is Shark Girl on The Bachelor?

Alexis Waters got out of the limo to greet Nick, dressed in nude pumps and a shark costume that she insisted was actually a dolphin because, are you ready for it? Alexis is an aspiring dolphin trainer. In fact, the contestant loves dolphins so much that for the rest of the evening, she periodically made dolphin noises to get Nick's attention and ended up having a private one-on-one conversation with him via poolside. But other than attaching herself to a random but noteworthy ocean creature, who is Shark Girl on The Bachelor?

Although she lists her occupation as an aspiring dolphin trainer (maybe she's waiting to see how this whole Bachelor thing pans out before she enrolls in any studies for it?), Alexis hasn't been too clear on what her actual job is, so I guess we can just leave it at that for now, provided that she wear human clothing for the rest of her time on the show.

But her interest in aquatic life and the ocean in general doesn't stop there. The Secaucus, New Jersey native and current Miami resident said in her Bachelor bio that if she could be any fictional character, she would choose Ariel from The Little Mermaid. (Why am I not surprised?) She also listed Titanic as one of her favorite movies. Maybe seeing those dolphins jumping along with the choppy waters in front of the ship really called to her.

But don't let the costume fool you. Alexis may be donning aquatic garb on The Bachelor, but that doesn't mean she's at a disadvantage. In fact, she could prove to be stiff competition for the other women. Like anyone who knows how best to play their social media game, her Instagram is full of selfies that have reached expert level and that show how far off Corinne was in thinking that the costume was hiding an unflattering figure. Clearly, she couldn't have been more wrong.

Her only given occupation might be “aspiring dolphin trainer,” but that just adds Alexis to a long line of Bachelor Nation contestants whose personal descriptions end up describing them better than their actual professions. Case in point—Daniel “The Canadian" from Season 12 of The Bachelorette, or Brandon Howell, who only lasted until Week 2. His listed profession was "hipster," so there have been much more quirky contestants than Alexis.

In the season premiere of The Bachelor, she's dedicated to this dolphin persona in what is clearly a shark costume, but likely the closest thing she could find to what she needed. Even when she’s sitting among the 29 other women who are wearing their best and slinkiest evening gowns, Alexis keeps up with her gimmick that might be embarrassing, but is still hard to forget. Plus, by the end of the evening everyone wanted to be her friend, and Nick seemed to appreciate her comic relief.

So if she can keep making Nick laugh, then maybe once she’s out of the shark costume and in human clothing, she could stand a real chance with the Bachelor. I'm already rooting for her.