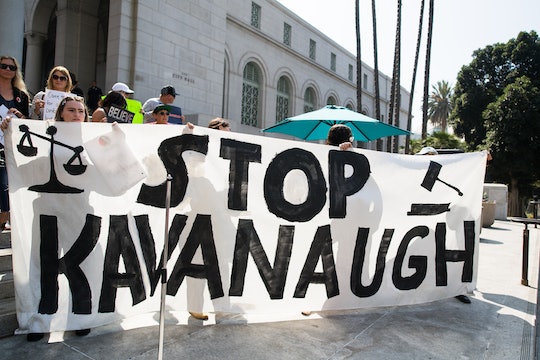 This past week has been a difficult one for sexual assault survivors. In the wake of the #MeToo movement, when millions of women connected across the globe to combat sexual assault in any form, it was pretty terrible to watch the Supreme Court confirmation hearing of Brett Kavanaugh. To watch a woman sit across from a sea of powerful men, all of them white, and recount her sexual misconduct experience — then have her story essentially ripped apart — was disappointing. But women rallied, with hundreds attending an impromptu "Believe Survivors. Stop Kavanaugh" rally in Los Angeles in a show of stunning solidarity and strength.

This week saw Dr. Christine Blasey Ford testify in front of the Senate Judiciary committee about her alleged sexual assault by Supreme Court justice nominee Brett Kavanaugh when she was in high school in Washington. Dr. Ford is just one woman to come forward with sexual assault or misconduct allegations; Deborah Ramirez accused Kavanaugh of exposing himself to her at a party when the two were both at Yale University, as Business Insider reported, and Julie Swetnick alleged that she was given drugs and gang-raped at a high school party when Kavanaugh (also in high school) was in the room. Kavanaugh has vigorously denied these allegations.

Romper has reached out to a rep for Kavanaugh regarding these allegations and is waiting on a reply.

In the wake of the accusations levied against Kavanaugh in front of the Senate Judiciary committee by Dr. Ford, hundreds of women took to the steps of the Los Angeles City Hall to show their support. Not just for Dr. Ford, but all victims who have the courage to come forward with their sexual assault stories regardless of the backlash.

In Dr. Ford's case, the backlash from reporting her story has been particularly awful. She and her family have had to go into hiding due to death threats since her name was released, according to the Huffington Post; in fact, her children have been moved to a separate location to keep them safe. Hopefully now that the Senate Judiciary committee has decided to open a one-week FBI investigation into the Kavanaugh allegations (arguably under immense pressure from protesters), she will be able to move forward. As Nithya Raman, a representative for TIME'S UP, noted during the rally in Los Angeles:

The Senate’s decision today is the result of Dr. Ford’s bravery, the bravery of survivors everywhere who have courageously come forward to tell their stories and the women and allies across the country who stood up and spoke out. Survivors voices matter and the chorus we are creating, bit by bit, is changing the conversation. We have more work to do. We must keep calling our representatives to demand that there be no vote on Kavanaugh’s confirmation until the FBI finishes a thorough and complete investigation with no artificial time line.

These women rallied on the steps of the Los Angeles City Hall to make sure we don't slide back in time. That we don't stop believing a woman's story based on a sliding scale of how powerful the man she accused might be. We simply believe survivors. Because the reality is that reporting your story shouldn't feel like a second assault. Time's are changing, whether men in power like it or not.