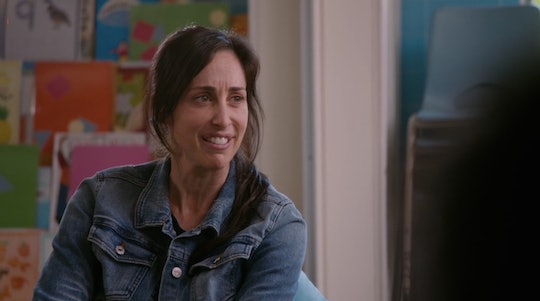 The Show Tackling The Question Every Mom Is Asking

"I don't know that I'm such a good mom," the character of Kate (played by creator and actor Catherine Reitman) confesses to a circle of moms and toddlers in the second episode of Workin' Moms Season 2. "Like, I don't think I'm a bad mom. You don't have to call child services or anything. But I don't think anyone watching me would be like, 'Oh, she knows what she's doing.'" To this, class leader Val (Sarah McVie) asks bluntly, "What is a good mom?"

The women all have different answers. "Well, not dumping your issues on them, to start," Kate says. "Or dumping them in the trash, the babies."

"Not shaking them," Anne (Dani Kind) adds. "Keeping them out of pools and fountains and lakes," Frankie (Juno Rinaldi) muses.

It's undoubtedly meant to be a funny moment, the comedic effect heightened further as Val says, "OK, well, I'm very happy that you've all managed to keep your children alive. And please do keep doing that. But outside of keeping them breathing..."

Even though the moment is fairly lighthearted, and the attributes of a "good mother" listed are all rooted in ensuring basic infant survival, the scene arguably makes a more important point about what it means to be a good mother. The answer, we might deduce, is that there is no simple answer.

In their own ways, all of the mothers in Workin' Moms are "good moms." Great ones, even. Frankie is going to therapy and actively working towards more stability so that she can offer her daughter the same. Anne is always honest with her eldest, thus giving her the tools needed to have open conversation on even the most awkward of topics. Jade (Nelu Handa), a new member of the crew this season, is a badass single mom to twins, not only keeping them both alive, but keeping seemingly everything together on her own. Alicia (Katherine Barrell) cherishes her role as a stay-at-home mom, somehow thriving despite how stressful this job actually is. And Kate is trying her best to enjoy stay-at-home parenthood even though she so desperately wants a flourishing career.

Through it all, they keep those children breathing, happy, and otherwise well.

Even in the hardest times, they're also being damn good mothers. We know it when we see Kate struggling in the morning hours at home with her baby boy. He fidgets and cries as she tries to cut his nails, wailing further when she nips the skin. We see Kate try to fit in a quick shower while her son plays on the bathroom floor. He soon propels her iPad into said shower. We see her watching the clock until 12 p.m., at which point she pours herself a large glass of wine, which she almost immediately throws into the sink upon hearing her husband coming through the front door, seemingly embarrassed that she considered day drinking. We hear her groan and grunt as her kid groans and grunts.

It isn't pretty, but at no point does she seem like a bad mother. An exhausted mother who misses other aspects of her life outside of motherhood? Absolutely. An adult human craving contact with other adult humans? Sure. A mother not doing everything she can do be there for her baby? Not at all.

Back in the scene of the mom-group, Val has a chance to finish the sentence she started. "But outside of keeping them breathing..." what is it that makes a good mother?

"Knowing them," she concludes. Getting to know them. Being present for them.

She isn't wrong, at least not totally. Taking the time required in order to get to know these little people we've made is essential to raising them. Dedicating that time to their development, as they grow and change and become different versions of themselves, is surely going to benefit all parties. Being as present as possible — playing, reading, talking, exploring, loving — it all matters.

Still, we can't always "know them" or "be present for them" as flawlessly, or effortlessly, as we may like. Sometimes, it's just not feasible. Sometimes, when you're going on an hour of sleep and you haven't had a bath in a few days and you can't stop thinking about how difficult everything is, it might take all the energy you have just to turn on Moana. Sometimes, there's just been one tantrum too many, and you suddenly find yourself sobbing to Green Eggs and Ham. Sometimes, you may react with anger rather than compassion, because you're only human, and it happens.

Knowing your children, and being present for them, irrevocably make up some pretty big pieces of the puzzle that is being a good mother — but they are not the only pieces. There are too many to count. It's all a jumbled mess with no instructions or guidelines or picture on the box to follow.

At the end of the day, though, there is no one answer. Being a good mother, a good parent, is one of the most complicated jigsaws of them all. Like the women in Workin' Moms, all we can do is our best, and hope it's enough.