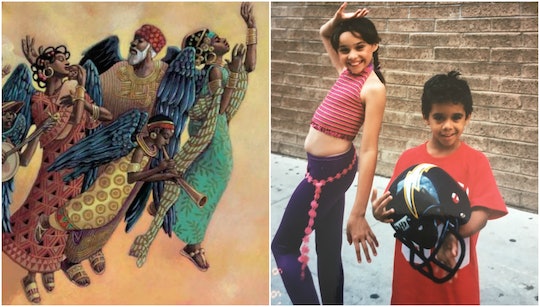 The Children's Book That Helps Me Survive In A Racist World

How do we teach kids about our violent and racist past? In many classrooms, by watching blockbuster period pieces about the Civil War that treat battered black bodies as a kind of set design. As a biracial teenager, I remember sitting in an all-white classroom in Arizona, watching actor-slaves forcibly drowned and worse, and then watching the white Matthews — Broderick, McConaughey — ennoble themselves in movies like Glory and Armistad.

Not long ago, I watched 12 Years A Slave, which had been bathed in praise for its hard-to-watch making-of-a-point (that slavery was bad). Midway through, I turned the movie off, but that didn’t stop me feeling smaller, weaker than I had before. Stories can give us power, but let’s not forget, they can also take our power away.

Obviously, 12 Years is not a children’s movie, but then, neither is Glory or Amistad or any of the films used to teach slavery to middle and high school students. In a painful blur, my fifth-grade teachers showed three or four violent blockbusters during our unit on slavery. I still don’t know why they couldn’t just, well, teach us, like they taught the American Revolution or the pioneers. Maybe, as white people themselves, they didn’t feel qualified. Or maybe they found the subject so crucial to the moral development of young masters-of-the-universe that they decided John Williams should score it. Maybe they just didn’t trust white children to find empathy for the black Other, absent special effects.

It's possible that other students did learn something from our bloody film festival. As the only student of color, however, I felt myself forgetting something, hope leeching from my bones as music swelled over whips and chains.

Luckily, I have somewhere to go when faced with hopelessness. A carved-out place for remembering my pride. I had it then. I still have it now. This is the lasting gift of a truly great children's book.

The book, tinged with a centuries-long grief, is proof that slavery can be taught in a way that leaves the survivors feeling stronger, safer, and more human than we’re sometimes allowed to be.

When black children are shot or white supremacists elected, when family members stumble under the whip America still wields today, I return, in my mind at least, to a folktale beloved by black families for over 200 years. Virginia Hamilton and illustrators retold The People Could Fly in a collection of black vernacular stories published in 1985, and when my mother read those stories to me as a child, the words burrowed deep.

In 2002, after Hamilton's death, illustrators Leo and Diane Dillon took up their brushes to create a stand-alone version of the title story, which you can find in any Barnes and Noble. The book, tinged with a centuries-long grief, is proof that slavery can be taught in a way that leaves the survivors feeling stronger, safer, and more human than we’re sometimes allowed to be.

In her introduction to the original collection, Hamilton describes The People Could Fly as "[one] of the mythical old tales in the tradition of 'things that never were'" — and yet, the story is more true than any I know. Over the years, it has helped me survive in a racist world.

Picture this: there once was a tribe in Africa, a people who walked on air. Forced onto slave ships, they shed their wings. ("Too crowded, don't you know.") They forgot about flying, though they never lost their power.

One day, a young woman called Sarah is whipped with her baby on her back — “that whip was a slice-open cut of pain." Sarah falls to her knees, her face filling with anguish. “I must go soon,” she tells an old man called Toby, a slave who remembers the words that unlock their secret magic.

Together they arch up, transforming into a glittering flock of blackbirds.

Seeing that Sarah has been pushed to her limit, old man Toby speaks the magic words — “like whispers and sighs” — that remind her of what she already knows. Sarah climbs the sky “like climbin up on a gate,” clumsy at first, then sure. One by one, Toby helps other members of the lost tribe reclaim the dignity of their wings. Together they arch up, transforming into a glittering flock of blackbirds.

But it’s not all fantasy. Those who can't fly are left behind to wait for their chance to run. So descendants of earth-bound slaves — me, us — must practice another, subtler magic. On the picture book's final page, a black family tells the story of the winged people to each other, their faces lit by freedom and firelight.

The best children’s books make the most vulnerable among us feel proud. Strong. It’s a forever gift, like a parent’s unconditional love. Yes, Hamilton sets out to portray the realities of slavery, but in doing so, she carefully guards the humanity of her audience. It's an incredible feat to tell the story of ancestors dehumanized and degraded, while preserving this more essential truth: that these battered people weren’t just bodies, but triumphant spirits, too. And despite our history, haven’t we all seen black people fly?

Already, I plan to ask my baby daughter's teachers to warn me if they’re going to show a slave movie, because I don’t want her stuck in a classroom from which she can’t escape, watching whippings filmed on studio lots. She doesn’t need that sort of education — she’s already destined to see, hear, and smell slavery, which is all around us, all the time. So much popular culture makes us feel chained to our heritage, or worse, ashamed. As a parent, it’s my job to teach my daughter to feel proud, and to give her a place to fly to when her hope is threatened.

Hamilton's book is that place, with those human souls lovingly rendered, and framed by wings unashamedly black. It’s one of my great hopes as a mother that The People Could Fly will empower my daughter as it has me. That the rustle of its pages will be like the whisper of magic words, destined to burrow deep inside.