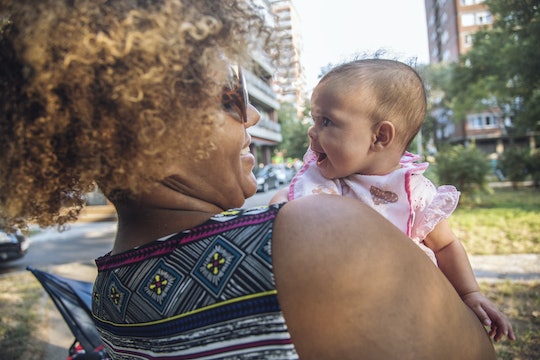 All moms have a complex and important job when raising children, but a variety of factors that can make that job more difficult exist and depend on a number of things. Things like finances, access to child care, and caring for a special needs child can all present a unique set of circumstances. And then, of course, there’s race and ethnicity. While some might want to act as though race isn’t important, the truth is that moms of color have to deal with painful things that white moms just, well, don’t.

By now I think it's safe to assume that, today, in 2017 and thanks to President Donald Trump's administration, things are becoming more and more difficult for people of color. But, honestly, things have always been hard for us. Granted, there’s a certain faction of individuals who are feeling empowered thanks to the messages, policies, and statements coming from the White House, like the so-called “alt-right” Nazis, the KKK, and such. But when you turn on the news and hear about a horrible atrocity committed against people of color, know that those atrocities have taken place at an alarming rate way before Trump was sworn in as president.

For example, black folks were being killed by cops way before there were body cams. And the prisons were full of black and brown folks way before white folks saw 13th and suddenly felt “woke.” There are so many other difficult things that people of color, and parents of color, have been dealing with for some time, and, to be honest, most white parents were able to simply ignore it all if they wanted to. These are just a fraction of the painful situations I have either dealt with myself, as a woman of color, or know too many people who have: