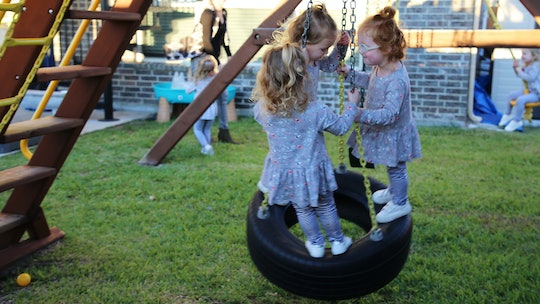 Think You Know Stress? Check Out The Busby Quints At School On 'OutDaughtered'

We're well into the fifth season of OutDaughtered, and the TLC reality series has more in store for the Busby family. From a family flu outbreak to the everyday struggles that come with raising six growing girls, Danielle and Adam have plenty of work ahead of them. In the Jun. 25 episode, titled "The Quints Get Schooled," the TLC crew visits the Busby quints' school on OutDaughtered as the girls undergo their first testing, and there could be cause for worry.

Back in Season 2 of the TLC series, Adam and Danielle began their search for the right preschool option for the quintuplets — Riley, Ava, Olivia, Hazel and Parker. Although the couple was shaken when Hazel was the only one who wasn't ready to join her sisters at preschool, all five Busby quints started pre-kindergarten in 2018.

In a short preview for the latest Season 5 episode, TLC teased a clip that shows Danielle in a bit of distress over her daughters' school evaluations.

"We're getting the results to the quints' evaluations tomorrow," Danielle said in the trailer. "It's impossible not to worry. They were extreme preemies."

The clip then jumps to a brief glimpse of the school's test, quickly followed by a shot of Danielle, who appears visibly concerned.

Nevertheless, it looks like the quints are doing just fine and fans will get to see more of them at school during Season 5. Prior to the season premiere on Jun. 6, Adam and Danielle revealed that OutDaughtered was filming at the quints' school.

"We have been filming at the quint's school and we can’t wait to see what the girls have been up to ourselves," the Busbys wrote on their Twitter account. "Remember last time they filmed at the girls school!?"

It's been a while since fans have seen the quints at school. Previously, Danielle wrote a blog post about their first day at pre-K, along with Blayke's first day of second grade. In the post, the Busby matriarch revealed that the girls would be separated in three different classrooms — but for good reason.

"The quints are all so different and we think splitting them up the way we did is what is best for each of them," Danielle said. "We have paired Ava and Riley together, Olivia and Parker Kate, and then miss independent Hazel is in a class by herself."

Danielle then explained why they chose to split the girls up the way they did. She wrote:

Hazel is so independent and could care less if her sisters are in same room as her…she is super social and confident, she will do amazing meeting new friends. We wanted to split up Ava and Olivia so they can hopefully grow a little bit more independent and not lean on the other identical so much. Parker does not necessarily want to be in a class with her sisters (lol) but when it comes to new situations or places, she does best with a sibling on her side…so we paired her with Olivia. Riley and Olivia bicker the most so Riley and Ava will do better in a class together than Riley an Ava.

The Busby quints are growing up fast. They recently turned four years old, which means they'll likely be starting kindergarten in a year or so, depending on what happens with their evaluation. And while they still have plenty of time to let their intelligence shine, I already know that the Busby family can get through anything life throws at them. But fans will just have to wait and see what happens next.