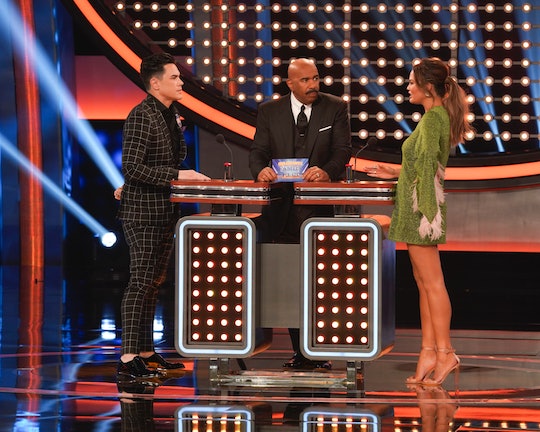 The 'Celebrity Family Feud' 2019 Schedule Has Something For Everyone

I’ve watched Family Feud on and off through a few different hosts, but the most entertaining one is probably Steve Harvey and that could be because of Celebrity Family Feud. The celeb version of the classic game show gives viewers a chance to see their favorite celeb and TV families answer questions on the spot and it’s pretty amazing. Now, the Celebrity Family Feud 2019 schedule is here and there are a ton of match-ups that are sure to be TV gold.

Season 5 officially premieres on June 9 at 8 p.m. ET on ABC with Chrissy Teigen and her family playing for the City Harvest charity against Lisa Vanderpump and some of her co-stars for The Vanderpump Dog Foundation. From there, the games only get better and the thing a lot of people love about Celebrity Family Feud is that it allows you to see some of these celebrities in a whole new light.

When Kanye West and his family battled it out against some of the Kardashians on the show, you could see how much fun West had in such a relaxed atmosphere. Sometimes, things can get a little heated, but it’s all in good fun and the 2019 season is full of some favorite real life and TV cast families.

Celebrity Family Feud airs new episodes every Sunday night starting on June 9 and after the premiere, the family teams range from NFL players and Victoria’s Secret models to a Stranger Things cast member and his family and the cast from Descendants 3. Sometimes the families that play aren't exactly related, but either way, Celebrity Family Feud is suddenly cool again.

There haven't been any hiatuses mentioned yet for the Celebrity Family Feud 2019 schedule, so as long as there are no breaks in the season, you can expect these families to battle it out on-stage every week while Harvey gives them the best side-eyes and one-liners you could hope for. Really, he’s half the fun, but there are bound to be some celebrity guests this season that will make you want to watch at least one episode.

Without further ado, here is the Celebrity Family Feud 2018 schedule:

black-ish vs. The Goldbergs

The Chainsmokers vs. 5 Seconds of Summer

Victoria’s Secret Angels vs. The Bachelors

The Maulers vs. The Brawlers

Harvey recently told People that his dream match for Celebrity Family Feud would be the Trump family and the Obamas on-stage at the same time. Honestly, I feel like that’s every fan’s dream episode and while I don't see it happening anytime soon (or maybe ever), there are still a lot of players this season to entice both new and already established fans.

Not only is Celebrity Family Feud entertaining, but each team plays to be able to donate the prize money to the charity of their choice. So regardless of who wins each week, a charity benefits. I can't say that all of these matches totally excite me, but judging by this list of all of the teams for this season of Celebrity Family Feud, there is something for fans of pretty much anything.