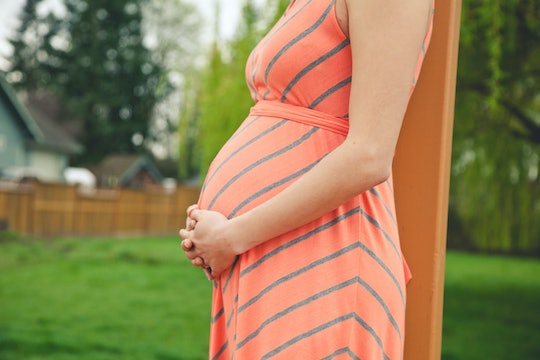 The moment I saw those two pink lines on the pregnancy test six months ago, the first thing that crossed my mind was, "How am I going to tell my sister?" My oldest sibling is not only my beloved big sister — she's my best friend. Over the past several years, as I've experienced new motherhood, she has struggled with infertility. I fully intended to tell her about my second pregnancy in the most thoughtful and sensitive way possible, but if I'm being truthful with myself, I botched it. Navigating pregnancy when your loved ones struggle with infertility can be a challenge, and it's a situation that should be handled with care.

When I found out I was pregnant again, my sister was in the process of applying to be in the pool for open adoption. With my first pregnancy, she simply guessed (she said she'd received a message from my uterus after seeing a picture of me). I'd be lying if I said I didn't hope she'd receive the same message again, just so I wouldn't have to break the news myself, but that didn't happen. After having a miscarriage the year prior, I was hesitant to tell anyone I was expecting, actually, but I've always told my sister everything. In this case, though, I just wasn't sure how. This time around, we were living thousands of miles away, and other people had started to ferret out my secret by eight weeks thanks to my constant vomiting and curbing my drinking habit.

I didn't want to wait any longer, so I attempted multiple voice and FaceTime calls. I didn't really know what I was going to say, though. I considered having my daughter tell her auntie what was in mommy's belly, but the more I thought about it, the more trite that seemed. So I decided I wouldn't beat around the bush. I'd just tell her. The problem? She didn't pick up the phone. She'd lost her voice and was too sick to video chat. And then this happened as we were discussing holiday plans via text:

Sister: We will have lots of fun. And wine.

Sister: Are you pregnant?

I'm the first to admit that the way I handled it was less than ideal. I'm not sure I did much better with my other announcements, to be fair, because it wasn't just my sister that I was worried about. In the early weeks of my pregnancy, I had one friend miscarry and another undergo surgery for an ectopic pregnancy. This last friend later began in-vitro fertilization (IVF) treatments. Yet another good friend was struggling with secondary infertility. She'd told me how upset she was when her sister-in-law recently lied to her about being pregnant, and there I was with my own clandestine fetus.

The fact is, most people will be over the moon for you, but they can't help it if your luck reminds them of their prior losses.

When it comes to telling an infertile or struggling friend or family member about a pregnancy, I've learned that honesty is the best policy. Be straightforward and avoid informal communications like text or messenger (do as I say, and all that). Try to time it to give her an out if she finds she needs some space. Good Therapy suggests an actual snail mail card. The most important thing, though, is that the news comes from you. You don't want them to hear it from someone else. Your loved one may be hurt that you told other people before them, even if your intent was to protect their feelings. Above all, make sure they don't find out via an elaborate Facebook reveal. According to Karin Ajmani, president of fertility benefits management company Progyny, such pregnancy revelations are an "emotional dagger in the heart." If you're planning one, give a heads-up.

Above all, be understanding of whatever reaction you receive. Everyone is going to be respond differently. The fact is, most people will be over the moon for you, but they can't help it if your luck reminds them of their prior losses. Clinical psychologist and Head of Patient Services at Progyny, Dr. Georgia Witkin says, "It is natural to want to avoid reminders of traumatic experiences. You may want or need your friend to be sharing your pregnancy experience with you, but she may not be able to do it, no matter how much she loves you." Consider that jealousy is a completely valid and expected emotion. If your news gets a negative reception, try not to take it personally. Don't get upset if you get unfollowed on social media; you can expect support from your friend, but that doesn't mean they want to have your weekly bump pictures in their face.

I have definitely fallen into the habit of complaining about my pregnancy aches and pains, for example, and my sister actually had to tell me that she didn't want to hear anything more about my morning sickness.

As you progress through your pregnancy, be considerate. And yes, I admit, it's a fine line to walk. You don't want to leave an elephant in the room, but you need to be circumspect about how much information you reveal. If you conceived easily, that's not something you need to share. I have definitely fallen into the habit of complaining about my pregnancy aches and pains, for example, and my sister actually had to tell me that she didn't want to hear anything more about my morning sickness. I felt terrible after because, of course, she would love the chance to be pregnant, nausea notwithstanding.

You don't have to shut anyone out of conversations about pregnancy, but make sure it's not all you talk about. You also need to avoid triggering language. Take a hard pass on the platitudes, such as "everything happens for a reason" and "all in good time." Do not suggest that she "just relax." Believe me, she's tried. On your side, you don't have to assume that she doesn't want to hear anything about your experience. She may be delighted to know what size fruit your embryo is, or perhaps not. Take your cues from her and be responsive, but you don't have to walk on eggshells.

Throughout your pregnancy, continue to be a good friend. Call and check in to see how they're doing, and show interest in and educate yourself about what they might be experiencing, whether that's IVF or the adoption process. Pregnancy can consume a lot of energy, but if you value the relationship you need to dedicate time to it. Don't exclude, thinking you'll spare your loved one from heartache, either. Invite your friend or family member to your baby shower, but understand if they don't want to come.

I have to remind myself of this all the time, but allowing yourself to be overcome by those kinds of feelings is making the entire situation about you.

Try not to be overwhelmed by feelings of guilt. I have to remind myself of this all the time, but allowing yourself to be overcome by those kinds of feelings is making the entire situation about you. Recognize that what your loved ones are going through is hard as hell. They'll likely have to endure multiple rounds of hormone injections, ovarian hyperstimulation, and egg retrieval surgery (not to mention the emotional and financial burden) just to get to the point that you're at, if they get there at all. It's not that what you're going through isn't hard, it's just that perspective is important.

No one who loves and cares about you is asking you not to celebrate what is indeed a joyous occasion. However, they should have a reasonable expectation from you of kindness, compassion, and a willingness to admit when you've made a mistake.