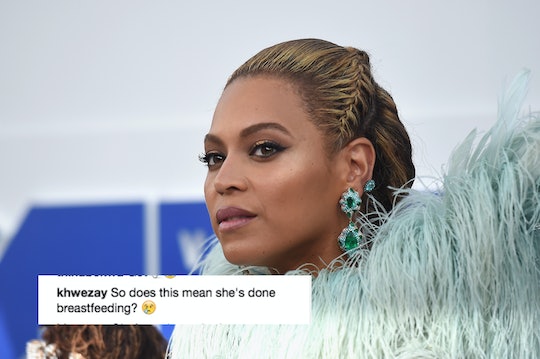 Those of us obsessed with watching Beyoncé's Instagram were treated over the weekend with a glimpse of the superstar enjoying a date night with husband Jay-Z. Whether it was the couple’s first time out together after welcoming their twins back in June is unclear, but it was their first time sharing a post-baby date night on Instagram. And the thousands of comments should have stopped at how gorgeous, happy, and rested the mom of three looks. But of course, that didn’t happen. Instead, people launched into heated debates over whether Bey was allowed to drink wine while (possibly) breastfeeding twins Sir and Rumi Carter, or if it was OK for her to be apart from her babies at all. The drama surrounding Beyoncé's post-baby Instagram just kept going, and it’s time for it to stop.

Of course, policing women’s bodies — and the choices they make with those bodies — is nothing new, but in pregnancy and after giving birth, it definitely takes on entirely new levels. Some people feel perfectly entitled to touch pregnant women or ask ridiculously inappropriate questions about their bodies. But what no one tells you is that those intrusions don’t stop once a woman gives birth.

For proof of that, just take a look at Bey’s Instagram feed recently. Her first pic with her new babies (at one month old) led to speculation over Beyoncé’s body after giving birth — specifically, whether she’d started exercising again, or even had surgery, to achieve a flatter belly. I should add here that it takes women a full year to recover after giving birth and that the 35-year-old singer is just shy of two months postpartum.

Now, with this latest round of pics, Bey has run afoul of those who seem to think that women should go into hiding after giving birth, or that new moms don’t deserve time to themselves. And I chose “new moms” there for a reason: note how no one is questioning whether JAY-Z would be too tipsy to care for his twins, even though the same Instagram post shows him enjoying a glass of what appears to be Cognac.

Even beyond that, the possibility that the new mom might — and I stress “might” — be breastfeeding has brought on even more drama. “If she is nursing the babies, wine ain't good," one commenter said. Another argued: "You feed your children with your breast why do you drink?!?"

I won’t get into whether there’s any empirical evidence that alcohol while breastfeeding is perfectly fine (there is) or whether Beyoncé could pass a significant amount of that (well-deserved) glass of wine to her babies (she won’t). The TL;DR version is that’s not really how breastfeeding works, and if a new mom is fine to drive, she’s fine to nurse; any real risk is in her being coordinated enough to care for her newborn, according to experts.

The far bigger issue is that her fans (or trolls… it’s hard to tell sometimes) seem ready to criticize the superstar as though they deserve any input on the choices she makes for herself and her family. Figuring out how to stay close after having a baby is a huge challenge for new parents. If Beyoncé and her husband can figure out a way to claim a few hours for themselves in order to reconnect, shouldn’t we be applauding them? With three little kids at home, remembering who they are as individuals and as a couple would probably make them better parents in the long run.

At no time in my life have more people demanded input on how I eat, drink, and live (other than when I was pregnant) than when they hear that I’m breastfeeding. For the most part, I’d just tip my coffee mug at them and sashay away. But if Bey’s Instagram commenters have proven anything, it’s that there’s really no way to avoid mom shaming entirely. Even reaching super-celebrity status can’t protect a new mom from unwarranted attack.

It's sad, really. And it proves my theory when it comes to talking to a new mom: if you're about to hit her with a statement beginning with the words "you should" or "you shouldn't," just don't. I guarantee, she probably needs the coffee mug, wine glass, or night out with her partner more than she needs any more unsolicited advice.