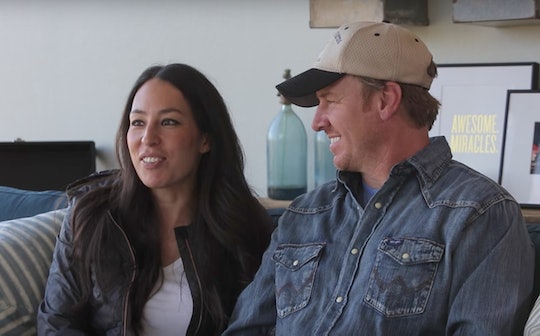 The Final Season Of 'Fixer Upper' Will Feature Some Celebrity Faces

Fixer Upper fans must have known that Chip and Joanna Gaines wouldn't let them down completely. Although this season is sadly the last one for the hit home improvement show, there are so many celebs booked for the final season of Fixer Upper to make up for it. This week, as Us Weekly reported, HGTV announced that ex-NFL player Tim Tebow and former first lady Laura Bush will make an appearance during Season 5's 19 episodes.

So at least it won't be all sad goodbyes for the hosts and viewers. The couple wrote on the blog last month that they were calling it quits to focus on their family and other projects. They wrote, "This has been an amazing adventure! We have poured our blood, sweat and tears into this show. We would be foolish to think we can go and go and fire on all cylinders and never stop to pause."

They added that they planned to "shore up and strengthen" the weak spots in their lives and "rest the places that are tired."

Of course, there was a lot of speculation that something nefarious was up when they made the announcement. Like that they were getting a divorce or something else was going on in their personal lives that would keep them from filming.

That is not the case. The couple went on the TODAY show this week to address the rumors that something aside from simply taking a break from the show was going on. Chip actually said that he gets why fans are talking about their relationship — since that is the reason they're stepping away from the whole thing. He said on the TODAY show:

Look, I’ll give [the rumors] a little credence. For us, the most important thing in the world is Jo and I’s relationship, followed very quickly by these four beautiful kids [of ours]. We didn’t want to push it, to redline it for so long that we woke up and realized we are at a point of no return. We wanted to take a step back and focus on what is absolutely the most important thing to us.

So yes, they are cutting back on work so that they don't continue to stress themselves out. But there's nothing scandalous here. What marriage doesn't need a little TLC now and again?

The couple said that they don't regret a single thing, either. When asked by the hosts if they'd do it all again, Chip laughed and said, "Absolutely, in a heartbeat. It was a joy. It was a pleasure." And they're not ruling out a return to the small screen one day, either.

The couple told TODAY that they'd be open to it, but nothing is in the works at the moment. Although fans will be bummed that there are only reruns to watch after Season 5 — which premieres in November — ends, the two have a lot of other things going in their lives.

Both Chip and Joanna have books coming out, Magnolia Market to run, and even a new line with Target. If anything, Fixer Upper was a great way to introduce themselves and their amazing work to the world. Now it's time to see where else they can go from here.

Joanna seemed happy on the TODAY show about where they were headed as a couple and how they got to this point. She told the hosts, "For me, I get first-hand experience what it's like to have this guy by my side to really push me to my dreams."

She said of Chip's new book, according to E! News, "I think that's what this book is: Get past fear and failure and go for your dream. In the beginning, I was the one terrified of that. So right off the bat, he was the one who encouraged me, 'If there's something you want, get after it.'"

It's good to know that they're still following their dreams, even if it means a final season of Fixer Upper. Now what's everyone going to watch on TV?