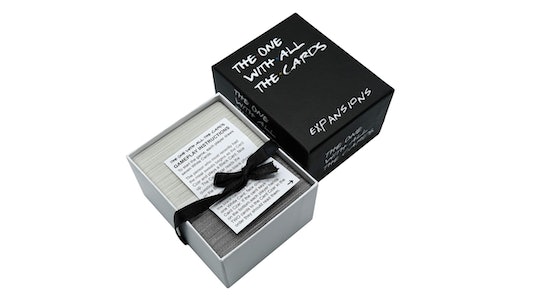 Could You *Be* Any More Excited About 'Friends' Cards Against Humanity?

Settle down around your friends' favorite couch or coffee shop table, because game night just got more rad than ever. The Friends version of Cards Against Humanity is here, and it's exactly as exciting as you think. No one told you games could ever be this way.

Based on the mega-hit sitcom from the '90s, this expansion pack for the popular Cards Against Humanity game is appropriately named The One With All the Cards. It offers up endless chances for laughter at game night. Although there are enough cards in this pack to play a standalone game, when paired with the famously ridiculous and risque Cards Against Humanity prompts, the options become hysterical. Save these games for well after the kids are in bed, though, because they're definitely just for adults (a.k.a. people old enough to have memorized classic '90s sitcoms).

The game features plenty of unforgettable lines from the show, including "Drinking a gallon of milk in ten seconds" and "WHAT ARE YOU DOING TO MY SISTER?", according to the seller's website. If you're familiar with Cards Against Humanity, then you know exactly how weird this game can get in just a few plays. So if you and your friends still secretly want to rock "The Rachel" haircut from now until the end of time, this is the perfect game to liven up your next hangout.

The One With All the Cards – Friends Sitcom (Expansion)
Lacesi

The One With All The Cards game just happens to be available when the world is in something of a Friends renaissance (Frenaissance?). The 25-year anniversary of Friends is right around the corner, featuring a movie theater release of different episodes, commentary, and behind-the-scenes content, according to Romper. If you and your crew plan on attending a viewing, then a post-watch game featuring The One With All The Cards is practically a must.

During its run from 1994 to 2004, Friends felt like one of the biggest television shows ever. The episodic adventures of Rachel Green, Ross Geller, Monica Geller, Joey Tribbiani, Chandler Bing, and Phoebe Buffay drew in millions of viewers every week. For instance, in 1996 "The One After the Super Bowl" episode brought in an astounding 52.9 million viewers to Friends, according to Life & Style. This show has serious staying power, too, and not just for nostalgia's sake. It looks like 20-somethings are still obsessed with Friends now, according to Vulture. It's kind of wild, but there's plenty of young people in college right now who know all the words to "Smelly Cat." All over the world, people of all ages still tune in to chill at Central Perk and get caught up on the lives of these six friends.

So to create similar memories with your own crew, consider inviting "The One With All The Cards" over for your next game night. You can figure out who is the biggest Friends fanatic among your group, and chat about your favorite moments from the show (all while playing a hilariously raunchy game). In time, this game might become "The One You Play With All Your Friends."