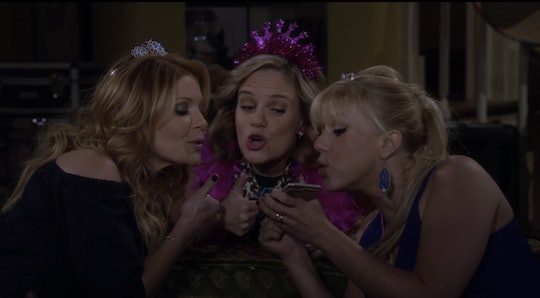 The Netflix reboot of Full House is not ashamed to be its very cheesy self, so of course the Fuller House finale is packed with Michelle Tanner jokes. D.J., Kimmy, and Stephanie get nice and tipsy in the finale and, after they make their way home, they decide to drunk dial their little sister Michelle. Although the Olsen twins decided not to help out with a cameo, the writers do a good job of keeping their character alive on the spin-off. In an "art imitating life"-fashion, the producers have Michelle building a fashion empire in New York City. And the characters who are in the series reference her enough to make it seem realistic. It's not like Michelle's totally disappeared (whether the Olsens might have preferred it that way, we'll never know).

So if you were waiting 13 episodes for a surprise, scandalous cameo (even by phone) from the youngest sister, you're out of luck. Instead, the "she wolf pack" finds themselves totally toasted after a night out and decided to give the youngest tanner a call. But instead of leaving a normal, tipsy voicemail at 2 a.m. like normal people, the girls huddle into the phone and recite old Michelle Tanner catchlines at her. It's actually really weird. They run the gamut.

It doesn't make any sense, really. It's normal for families to have inside jokes. But it's highly unlikely that Michelle, as a grown woman, still says those things. And why wouldn't you also just leave a complex sentence to say hello? They could have made another Olsen twin joke or made fun of New York City or something. That being said, Stephanie's tagline, "how rude," is thrown around over and over and over again in the reboot. Who does that? I know they aren't real people, but it just doesn't make any sense.

But the thing about Michelle's jokes is that they were cute because she was cute as a kid. Wagging your finger and telling a "mister" he's "in big trouble" takes on a whole other meaning when you're a grown woman. I think they call that sort of thing a kink, not a catchphrase. Right?

If the Olsen twins turned down a cameo because they didn't want to recite their old jokes, who can blame them if this was how they were going to have act?