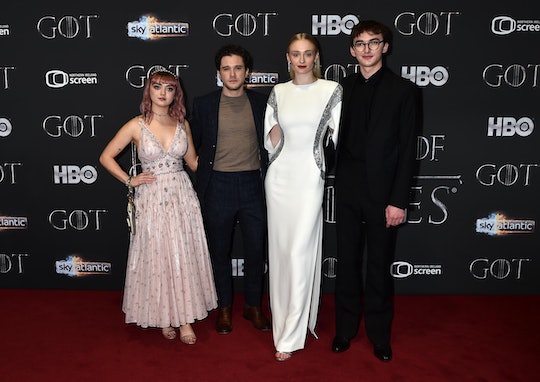 Game of Thrones is coming to an end on Sunday, and it's sure to be an emotional episode for viewers. The HBO series has been on the air for nearly 10 years, and has a loyal fan base. Longtime viewers aren't the only ones in their feelings about the Season 8 finale, though. The Game of Thrones cast has as many feelings as you do about the finale, and they're sharing them before the last episode airs.

Peter Dinklage, Emilia Clarke, Kit Harington and others shared their thoughts on how fans will receive the final episode with Entertainment Tonight. Thus far, the Game of Thrones fandom has been divided on how the season is going. The cast told Entertainment Tonight that probably won't change after Season 8, episode 6 airs on Sunday. Still, Dinklage told the outlet that despite fan gripes with the show, writers Dan Weiss and David Benioff are great TV writers.

"There are no better writers in television than [showrunners] Dan Weiss and David Benioff. They ended it brilliantly. Better than I could have imagined, and you people are in for it," the actor, who plays Tyrion Lannister on Game of Thrones told Entertainment Tonight. "It ends beautifully for my character, whether it be tragic or not."

Other Game of Thrones stars, like Clarke, who plays Daenerys Targaryen, and Harington, who plays Jon Snow, felt equally positive about Season 8. Clarke, 32, called it the "Best season ever!" in September 2018, according to the outlet. Harington added that he felt "tethered by this show" and now that it's over, he's enjoying rewatching "the final hurrah." Jacob Anderson, who plays Greyworm on Game of Thrones, told Entertainment Tonight he was "conflicted" about how the show ended.

"I felt really conflicted about Grey Worm's last appearance. I felt really satisfied with his story, but also I was kind of like, there's — I felt very conflicted," he said. "This is when the arms start coming up and being like, 'I don't know, I don't know what you're talking about.'"

While some fans are sitting back and enjoying every second of Season 8 of Game of Thrones, others are unhappy with the way it's played out so far. Some have even gone as far as creating a petition on Change.org, calling for creators to remake Season 8 with different writers, Deadline reported. More than 1 million people have signed the petition thus far, though it's unlikely Weiss and Benioff will give Season 8 a do-over. The petition states that the show "deserves a final season that makes sense." The goal, according to Deadline, was to get 1,500,000 signatures. Fans are still turning out in droves to sign the petition, which is nearing its goal.

Love it or hate it, Game of Thrones fans waited almost two years for the final season to be finished and ready to go. Now that it's here, and there's just one episode left, you should probably enjoy what you've got. The finale may not live up to your expectations, but there's always the prequel series set to premiere some time after the show ends.