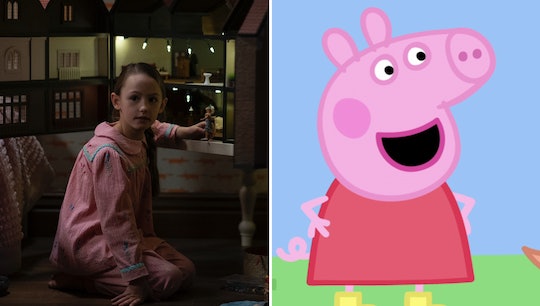 Who Else Is In Shock That Flora From 'The Haunting Of Bly Manor' Is Also Peppa Pig?

Just like you and me, the internet is completely in shock to find out that the little girl from The Haunting Of Bly Manor also voices Peppa Pig. If you've been watching the Netflix horror series based on Henry James' classic story The Turn Of The Screw, you already know little Flora has a tendency to be spooky, creepy, and (sorry Flora) just all around terrifying sometimes. But also her voice was sounding pretty familiar to some eagle-eyed watchers for good reason.

Amelia Bea Smith, the super talented 9-year-old actress who plays Flora on the massively popular The Haunting Of Bly Manor, has also been voicing Peppa Pig for quite some time now. She took over the role in February from 18-year-old Harley Bird, who had been voicing the sassy little piglet since she was just 5 years old, as per The Evening Standard.

Several people took to Twitter to wonder whether or not spooky little Flora, with her sing-song voice and perfect diction, could possibly be Peppa Pig herself. One social media user tweeted on Monday, "why does flora from haunting of bly house sound like peppa pig?"

And on Monday Netflix confirmed the news on Twitter: "Amelie Bea Smith from The Haunting of Bly Manor is also the voice of Peppa Pig! Pass it on."

Obviously this news was enough to set Twitter ablaze with people trying to wrap their heads around the bizarre crossover. It was pretty satisfying for some people who had been struggling to figure out where they recognized Flora's voice from during The Haunting Of Bly Manor. Mystery solved.

Another social media user pointed out that 9-year-old Bea Smith is really going for it with her career at a young age, writing "LOVE that Haunting of Bly Manor's Flora also voices Peppa Pig. You go Amelie Bea Smith! Diversify that portfolio early."

When the official Twitter page for The Haunting Of Bly Manor tweeted "can ghosts whistle?," social media users were quick to pick up on the call back to the 2018 meme of Peppa Pig hanging up on Suzie Sheep because she could whistle while Peppa still could not.

Someone else wrote that they would love a little crossover moment by hearing Peppa say Flora's favorite saying, "perfectly splendid."

I think we can all agree that Amelia Bea Smith has some serious acting range.

And that new Peppa Pig episodes might take on a spooky meaning to fans of The Haunting Of Bly Manor from this point forward.