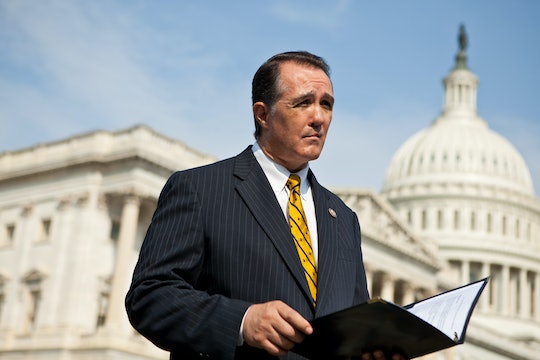 This GOP Rep Asked Female Staffers To Be His Surrogate, & WTF

Each day, it seems like there is at least one new headline involving a high-profile man either resigning or being fired from his job as a result of sexual harassment or abuse, and on Thursday night, it was Arizona Rep. Trent Franks who announced his resignation, amid accusations of inappropriate behavior towards women. But in a statement, the GOP rep who asked his female staffers to act as surrogates so he and his wife could have another baby made some confusing, and frankly, pretty misleading, statements about IVF and reproductive technology that seem to stand in opposition of the policies he's fought for.

Franks, who has been described by The Washington Post as one of "the most conservative members of the House," ultimately decided to resign after the House Ethics Committee confirmed that it was investigating Franks for conduct “that constitutes sexual harassment and/or retaliation for opposing sexual harassment.” While Franks did not specifically admit to asking his subordinates to act as surrogates on behalf of him and his wife, he did confirm that he had "[discussions] of surrogacy with two previous female subordinates [that made] each feel uncomfortable," and added, "I deeply regret that my discussion of this option and process in the workplace caused distress."

Yet, in the very statement in which he was owning up to his inappropriate behavior, Franks — who is staunchly anti-abortion and who often cites religious scripture, according to The Guardian — made sure to communicate that, in his view, he hadn't done anything intentionally wrong, and that he was simply a man who wanted to expand his family, not realizing that asking his subordinates to carry his child would obviously freak them right out.

In the two-page statement, Franks wrote that he and his wife had struggled with infertility, and that after having multiple miscarriages, they turned to "a wonderful and loving lady" who acted as a gestational surrogate for the couple, allowing them to have a set of twins. They wanted to try for another child with the help of another surrogate, but the pregnancy didn't take. At that point, it seems, Franks broached the topic with two women in the workplace, without foreseeing, as he later explained, "how the discussion of such an intensely personal topic might affect others."

As a result, Franks said he opted to resign, not specifically because he thought he needed to, but because he felt the "current cultural and media climate" would mean he may end up being unfairly condemned. Franks wrote,

I am deeply convinced I would be unable to complete a fair House Ethics investigation before distorted and sensationalized versions of this story would put me, my family, my staff, and my noble colleagues in the House of Representatives through hyperbolized public excoriation. Rather than allow a sensationalized trial by media damage those things I love most, this morning I notified House leadership that I will be leaving Congress as of January 31st, 2018.

It's concerning, of course, that Franks doesn't seem to see why discussing intimate details of his private life with his female subordinates would be problematic — especially if those discussions so much as suggested that he may be asking them to consider becoming a surrogate for him and his wife. But his statement is problematic for another reason, too: though Franks has been an outspoken critic of gay marriage and abortion, according to The Advocate, he made sure to let himself off the hook for using reproductive technology by claiming that he and his wife used "a pro-life approach" with their twins.

To be clear, there is nothing even sort of wrong with a couple wanting to have children, and taking advantage of reproductive technology to do so. But it does seem incredibly hypocritical to use said technology when you are also pushing an anti-abortion agenda — and when, according to The Advocate, you once called President Barack Obama an "enemy of humanity" who used tax dollars for "the killing of unborn children." That's because by attempting to restrict abortion access on the argument that life begins at conception and that embryos have the right to life, Franks is, by definition, also in favor of restricting access to IVF, which helps couples like him and his wife have the children they so strongly desire. A representative for Franks did not immediately respond to Romper's request for comment.

In Franks' statement, he indicates that his twins were born using a gestational surrogate who was not genetically related to his children. That means that the couple must have used IVF, yet the anti-abortion Louisiana Right to Life Federation argues, as many similar organizations do, that gestational surrogacy and IVF result in "many unborn babies that are sacrificed for the sake of the healthy children," because of the creation of multiple embryos. That statement is obviously only accurate if you consider conception the beginning of human life — a viewpoint that is not recognized by the medical or scientific communities. In his statement, Franks specifically noted that he and his wife used "a pro-life approach that did not discard or throw away any embryos." Yet not only is it not at all clear what that even means, it's also awfully convenient that Franks was able to find a loophole around his own convictions that would allow him to use reproductive technology for his own benefit, while supporting a position that would take that right away from others.

In gestational surrogacy, eggs are retrieved from the mother and then fertilized in a lab using the father's sperm. According to Tennessee Reproductive Medicine, in the days that follow, embryologists evaluate the embryos that have survived (many often fail to grow), and those that have the best shot becoming a successful pregnancy are implanted into the surrogate. Often, as The Louisiana Right To Life Federation points out, this means that more embryos will develop than are actually necessary — according to LiveScience, a 2011 study found that for best results, doctors should aim to retrieve 15 eggs from the mother during an IVF cycle to be fertilized. Those extra embryos are often frozen (and not all embryos survive the freezing and thawing process), and in many cases, they may end up discarded — which, by definition, has to be just as unacceptable to anti-abortion advocates like Franks as actual abortion is.

It is possible, of course, that Franks and his wife only created two embryos, both of which were successfully implanted and both of which turned into healthy children, meaning that there would be no concern over unused or damaged embryos. Yet the likelihood of that actually happening would be extremely low, and for many couples, that wouldn't be a financially viable option (not to mention that it would also be a difficult physically and emotionally to only be creating one or two embryos at a time).

Or, the couple would use a form of surrogacy where a man's sperm is inseminated into the surrogate via IUI, according to Modern Family Surrogacy — though since the surrogate would be using her own eggs, it's not an ideal solution for many couples.

The only other option for couples who want to avoid the anti-abortion concerns associated with IVF, though, would involve the man actually having sex with the surrogate.

The point though, isn't whether Franks should or shouldn't have pursued surrogacy — it's completely his choice. Aside from the glaring issue of sexual harassment, he has also suggested that his version of IVF, whatever it may actually be, is the morally acceptable version that doesn't deserve to be scrutinized like the options used by other couples. And even if he hadn't crossed the line with his female employees, that would still be something that is deserving of criticism.

If you're going to dedicate your career to pursuing policy meant to pass judgment on the personal decisions people make about their own health and bodies, then those judgments should apply to you as well. In 2013, Franks argued against making abortions legal in cases of rape or incest — his argument being that "the incidence of rape resulting in pregnancy are very low," according to The Huffington Post — yet he seems to have no problem making an exception about IVF. And given all the other couples who stand to be affected if anti-abortion legislation also restricts their access to reproductive technology, it's something Franks deserves to be called out for.