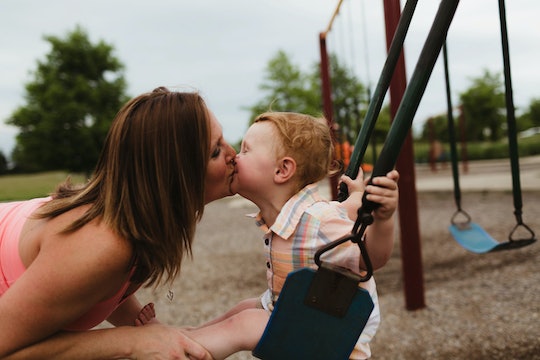 How Katie Bower Became The Most Hated Mom On The Internet, & Why She Won't Be The Last

Katie Bower is a pretty typical mom of five. She loves her kids, loves DIY projects for her home, travel, style... and she just happens to have more than 53,000 followers on Instagram. Going through her photos — of her adorable children, beautifully appointed home, and cute outfits — I understand the appeal. Her account is aspirational (white as a main decor color when you have five children is damn impressive) but lacks the high-gloss of some other influencers, so what she's doing feels just this side of possible for followers. Juxtaposed against her beautifully filtered photos are unpretentious, chatty descriptions of what's going on. She talks about the difficulties her husband faced putting up a new basketball hoop for the kids, about how her dog threw up on the jute rug. But it was comments on an Instagram post admitting that photos of her son don't perform well that recently brought her attention — the internet closed in around Bowers specifically, but the episode revealed something important about many other moms. About all of us.

Let's start with Bower. It was her son Weston's birthday, and Bower posted a lovely tribute to him, since deleted but captured on Twitter by a Buzzfeed news editor, beneath a smiling picture of the 6-year-old, extolling his "sweet hearted" and "unique personality." But, she did not stop there...

"Guys, I am going to be perfectly honest... Instagram never liked my Munchkin and it killed me inside. His photos never got as many likes. Never got comments. From a statistical point of view, he wasn't as popular with everyone out there."

She was cleaning house and no one could get her to put that broom away:

My insufficiency caused this statistical deficit because my Munch should get all the love and squinty eyes are totally adorable."

"I wanted to clarify that I revealed this feeling because I know one day he will see the numbers and have to learn that his value is not in online approval. This is a hard lesson for anyone to learn and I'm thankful I have learned it."

OK. So, so, so much to unpack , and I want to start with a few important things before we delve into the rest. Firstly, Bower got a lot flack for this, the heat of which you cannot understand until you've been on the receiving end. She became a symbol of everything wrong with our culture, endlessly dissected on Twitter. "@MaytagBrand will you stop giving Katie Bower free appliances after this debacle?" wrote Twitter user Kelly Smith. "This episode of Black Mirror sucks," wrote user Robert Phillips.

Under siege from internet flash mobs, Bower clarified to TODAY Parents by email that, "I adore all my children and do not see them in terms of 'likes.' I decided to talk about it because I learned a valuable lesson — that our value doesn't depend on someone else seeing our worth." Bower did not respond to Romper's request for comment.

Flawed judgement aside, Bower got a lot of undeserved flack for this post. People overreacted (we love to slap a scarlet letter on a wayward lady); some went as far as to suggest that her children should be removed from her home, which is absolutely absurd. I don't think Bower is a bad mom and it's clear to me that she loves her kids.

I think any parent can relate to the heart of what she's saying: I'm sure many of us have felt pangs of hurt when we see our child get upstaged by, say, a younger sibling or a new baby cousin at a family gathering. In fact, in the kooky world of social media personality as career, this bizarre and deeply problematic "problem" makes a kind of sense. Rejection and approval have long existed, but social media has given us confirmation: hard metrics and other accounts to compare ourselves to. Some of have even figured out ways to improve our chances at the dopamine rush of anonymous approval — just as a new baby plotline can boost ratings for TV shows, social media mavens have discovered, to quote Bower, "people like babies."

The instinct to incorporate children into one's "brand" is hardly new. Leopold Mozart (yes, father of that Mozart) quickly realized his own career as a musician could be boosted by touring with his preciously talented children. A more modern example of this idea can be seen in via YouTubers Sam and Nia, who cracked the fame code in their initial viral video "Good Looking Parents Sing Disney's Frozen," before recording other Disney covers and then revealing their pregnancy and subsequent miscarriage on the platform (the broader lesson here: the more kids the better).

People aren't having babies for the likes (we hope), but entering parenthood in general and motherhood in particular provides a distinct kind of affirmation that is hard to ignore. None of us are immune to positive feedback on our 'grams, but for the parents who seek out a lifestyle paid for in part by sharing their family life, this is going to be extra noticeable — because the margins are big. Bloggers Mandy Rose and Meagan Paullin told The Work At Home Woman that they make $40,000 a year from influencer marketing. The industry is predicted to be worth anywhere from $5 to $10 billion by 2020, according to Mediakix.

Let's divorce human emotions from this for a second: likes and comments are, in a sense, Bower's bread and butter. Her posts only look casual — they're actually thoughtfully planned out for maximum follower engagement. She needs to keep careful track of what keeps her followers... following. If a particular type of post performed well last week, it makes business sense to post something similar next week. Charming Boho outfit got a thousand likes last week? Post another this week. Family portrait performed well? Better get another up there soon to keep the momentum going. Picture of your fall centerpiece only got a couple hundred likes? Read through the comments, see what people had to say about it, and tweak your next home decor post accordingly.

But here's the thing: when your brand is your life (or, let's face it, an idealized version of your life) and your data points are your loved ones, you can't divorce human emotions from it, can you? As Dr. Brooke Duffy, a professor in the Department of Communication at Cornell University, pointed out to Romper in an article about the booming business of pregnancy announcements, "Announcing a significant life event — an engagement or pregnancy, for instance — has always had a 'public' dimension with the sharing of personal news with one's social connections." The difference is that now, it's profitable. The result is this bizarre combination of knowing this is a business... but it's still, in some way, you. And your house. And your DIY crafts.

Commodifying your life is nothing new. Sex workers have been doing this (albeit very differently than most social media influencers) from the beginning of history. Actors. Talk show hosts. Essayists (I say this with some level of self awareness, after all). Yes it's your work, but you're incorporating yourself into it in a way most people don't. So a rejection of the work feels, perhaps, more personal than it might for, say, a bank teller or an accountant.

We've always had cults of personality, person as product (more accurately: perception of person as product). The only difference now is the perpetuity of remaining "on." It's not one show or one magazine spread anymore. For social media influencers, it's all the time. It's easy for the lines between real life and whatever you've got going on on Instagram to get blurred.

Do not start thinking of your child's 'statistical deficits' as such.

To be clear, I don't necessarily think promoting onself is in and of itself a bad thing (how wonderful life is now Chrissy Teigen is in the world), but it's something that must be approached mindfully, especially if you're going to incorporate something as personal as your motherhood and as vulnerable as your children.

Because even though they may feel like little extensions of us, of our brand, they are their own people. Even though they are miraculous and beloved to us, we cannot expect our faceless audience to see them the same way. We must ask ourselves why we feel compelled to share them. And, hey, I include pictures of my children and stories about them in my work all. the. time. But what I don't do is alter them to make them more consumable or worry about what it means about them if they aren't... consumed. I'm certainly not photoshopping them to better fit my brand, which not all social media influencers can say.

In the interplay of life and "lifestyle," it's important to constantly remind yourself which comes first: do not start thinking of your child's "statistical deficits" as such. If you do, write about it in a private journal. Do not worry about your child "see(ing) the numbers" because he won't unless you go out of your way to show him. My kids don't know who my Top 8 MySpace friends were, and even if Instagram is a thing in 10 years, little Weston certainly isn't going to go back through 10 years of photos to calculate how many likes he got compared to his siblings or mom's outfits.

I didn't write this essay to roast Bower, but to highlight a larger issue that I saw perfectly encapsulated in her admittedly really icky birthday post — this creepy, problematic, blurring between fantasy and reality and the "datafication" of people.

And yes, Bower perpetuates this weird culture of mommy-bloggers and lifestyle influencers... but so do her followers. You can't influence an empty room. We like what we see, and even though we know it's an illusion we're angered when the product we're consuming is spoken of in terms of production.

It's the likes that keep these accounts going, that encourage the account holders to keep "selling" to us.

And we're giving them.

More Like This
I’m Getting Dual Citizenship For My Jewish Children, Just In Case.
Tips For Apple Picking With Kids
Molly Yeh Draws The Line At Hot Pockets
Home Reno Culture Makes Me Feel Like I Live In A "Before" House