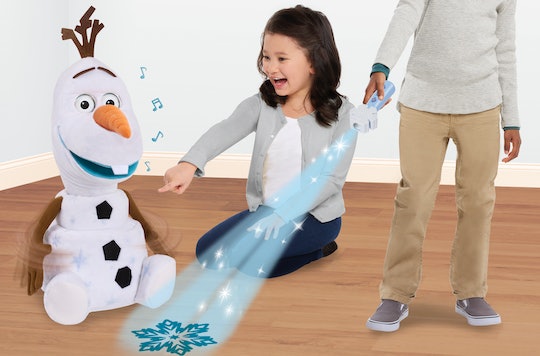 This New Olaf Toy Follows You Around, & Your Kid Is Never Letting It Go

Have you parents of toddlers prepared yourself for Frozen 2 to hit theaters on November 22? Just in time for the long-awaited sequel, get ready for the Disney's 'Frozen 2' Follow-Me Friend Olaf. This musical, plush toy will probably be your toddler's new best bud and your worst nemesis. It seems like just yesterday when the original Frozen was released, and my then-toddler was following me around the house belting "Let It Go" (a habit which lasted two years). I've only recently let that hurt go. Now that I have two more toddlers, and I'm preparing myself for them to fall in love with Olaf as much as my firstborn did.

The coolest thing about the Follow-Me Friend Olaf, a talking stuffed representation of Elsa and Anna's beloved snowman buddy, is the "magic" snowflake controller that comes with it. Kids can use the controller to project a blue snowflake image that will activate Olaf and make him follow the light. On top of that, Olaf can raise his eyebrows, turn from side to side, and open and close his eyes. Toy manufacturer Just Play recommends this plushie for kids 3 and up.

If all that sounds harmlessly adorable, there's more: Olaf cheerfully sings a new song from Frozen 2. (Yes, that's just one song — singular). So your tot can listen to Olaf sing over and over again with the push of a button. Along with his musical repertoire, the snowman also parrots his signature phrases from the new movie. The manufacturer doesn't specify how many quotes Olaf will rattle off on command, but parents know that doesn't matter. Kids will play the entire collection of phrases on repeat.

Fans of the Frozen franchise will love watching Olaf follow them around, moving, singing, and talking. Follow-Me Friend Olaf retails for $39.99 and is available at mass retailers like Target. If you plan to make seeing Frozen 2 a family outing like I do, the toy is a fun way to introduce kids to the movie before its release.

And while Olaf himself doesn't require assembly, you'll want to make sure to buy batteries before your kiddos get him. The stuffed toy includes four AA batteries. However, you'll have to supply two additional AA batteries for the snowflake controller.

Just like Olaf goes everywhere with Elsa and Anna in the original film, your tot will probably insist on bringing their new friend with them on all their adventures. Bear in mind, the wand doesn't attach to Olaf, which means it can easily get lost. This might be a blessing in disguise for parents who will have had enough of hearing Olaf singing the same song ad nauseam. But TBD if it's worth the headache of your kid asking you again and again if you've seen their magical wand.

Even with that risk in mind, the Frozen 2 Follow-Me Olaf is pretty hard to resist. He'll melt your toddler’s heart — and probably yours, too. Even if you hate to admit it.