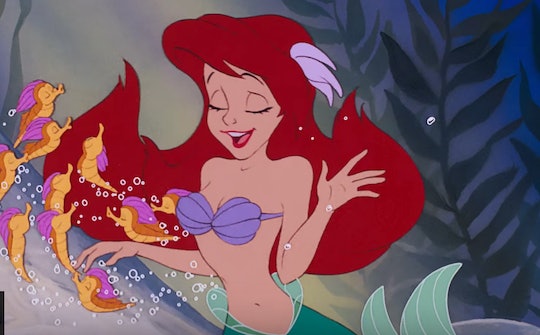 Get ready for the ultimate throwback! The Wonderful World of Disney: Little Mermaid Live is coming to ABC in October, so you and your kids will soon be able watch a Disney classic played out live with a touch of animation. It also means the world will shortly have new renditions of classic songs like "Under the Sea" to enjoy, so get stoked for both the TV special and the playlist that's sure to follow.

More Like This
Halle Berry Shared A Beautiful Throwback Pregnancy Photo On Mother’s Day
Ben Affleck Shared A Cute Halloween Photo With Jennifer Garner & Their Kids On Instagram
Everything You Need To Know About Prince Harry & Oprah Winfrey’s Series
Here's Everything We Know About 'Paw Patrol: The Movie'

ABC announced the news on Tuesday, and although details are still fairly scarce, the live remake sounds like it will be quite the event. The two-hour special will mix the original 1989 animated film with new, live performances. According to Entertainment Weekly, the new performances will all be sung by celebrity artists, so viewers can probably expect to see some big names voicing their favorite Little Mermaid tunes.

ABC's decision to weave live performances into the animated film will make it stand out from recent live musical remakes such as Fox's Grease: Live! and NBC's Hairspray Live! However, according to the Hollywood Reporter, this mix-and-match approach isn't new. Just last June, musicians took to the Hollywood Bowl stage to sing classic Little Mermaid songs as the Disney film played in the background. Thanks to ABC's upcoming special, however, it seems like that kind of event won't be limited to those with tickets anymore — it'll be streamed on ABC for everyone to enjoy.

This isn't the only Little Mermaid adaptation in the works, either. According to Teen Vogue, there are currently three Little Mermaid film remakes coming up, although only one has a release date at the moment. The first — and probably most hyped — version will come from Disney itself, similar to its Beauty and the Beast live-action reboot (and we all saw how exceptionally well that did). The Disney remake will reportedly pair Hamilton's Lin-Manuel Miranda with composer Alan Menken to write the movie's songs, and judging by the collective talent in that duo, it'll be nothing short of amazing.

Universal is also set to drop a live-action remake of Hans Christian Andersen's classic fairy tale, but unfortunately, the film has run into a few speed bumps since the project was announced in 2015, with both its director and its lead actor walking out on the film, according to Teen Vogue. Ouch. Understandably, Universal hasn't given the world a release date yet.

The third film remake is reportedly due this summer, although it's a much looser retelling of Ariel's story. The trailer for The Little Mermaid was released in March and switches up the fairy tale version so that it takes place in Mississippi. Judging by the trailer, the plot revolves around a mermaid, a little girl, a reporter, and some sort of evil magician. Since it'll be coming out sooner rather than the other remakes, it's probably a great movie to start with in order to kick off your Little Mermaid remake spree.

After that, ABC's The Wonderful World of Disney: Little Mermaid Live will be hitting screens on Tuesday, Oct. 3. Make sure you've caught up on all the classic songs before that so you can sing along to the live-action version. After all, it's a great excuse to rewatch an old Disney favorite with your little ones.