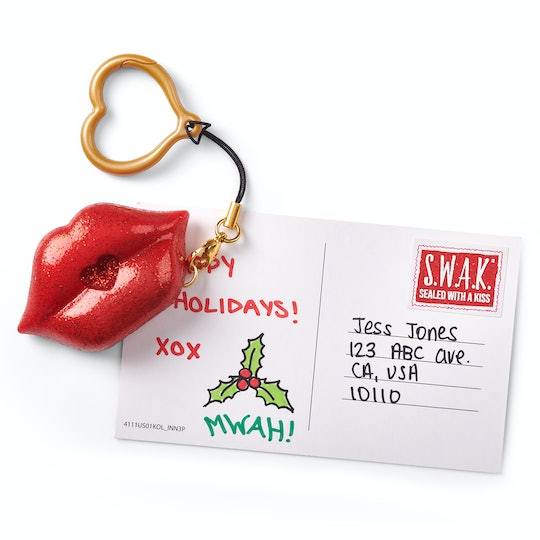 If you haven't heard of Fingerlings, chances are you're living under a rock. These mega-popular little finger-clinging interactive pets have been all the rage for awhile now, and once again are topping kids' Christmas wish lists this holiday season. Now, the makers of Fingerlings are launching a new interactive toy just in time for the holidays, and they're seriously the perfect stocking stuffers.

On December 3, WowWee, the Canadian toy company behind the Fingerlings phenomenon, will introduce S.W.A.K. (Sealed With A Kiss), a collection of smooching, interactive keychains. These bedazzled lip-shaped toys are equipped with WowWee's "KissTech™" — a feature that first debuted in their Fingerlings HUGS line — which uses unique sensors to detect your cheek and actually give you a kiss, according to a press release. That's right, these little hand-held S.W.A.K.'s can plant a big smooch on you, complete with the "Mwah" sound effect. The longer you hold the S.W.A.K. to your cheek, the longer that "Mwah" sound lasts.

There are 12 different shiny designs in the new line, ranging from "unicorn sparkle" to "tropical kiss" to "tie dye," and each comes with it's own unique kiss sound. You can see why these little lip-shaped smoochers would be fun to collect, share, and swap. What's more, every S.W.A.K. comes with a postcard, and a slot at the top to display that postcard, or photos of you and your smooching squad. These little "Mwah" machines will be available exclusively at Walmart for $6, and if they're anything like their Fingerling counterparts, they'll be selling out fast.

Last year, Fingerlings were among the most sought-after toys of the 2017 holiday season. They sold out on Amazon "very quickly" and "evaporated from shelves" at Toys 'R Us, according to CNBC.

This year, Fingerlings are so popular, they're being targeted by what some are calling "Grinch Bots," or computer programs that buy up massive quantities of the hottest toys of the season so they can resell them at a much higher price on third-party sites like eBay, according to News 10 ABC. The end result is that these Grinch Bots ultimately force parents to pay exorbitant prices f they want to get their kid his/her most desired Christmas toy.

So, if you're on the hunt for Fingerlings this season and can't score the one your child wants, WowWee's new S.W.A.K. line just might save the day. That's not to say that S.W.A.K.s don't make seriously awesome gifts in their own right. I can see my teenage cousin, who's Instagram account is pretty enviable, using these little S.W.A.K. smoochers for some adorable selfies with her friends. And let's be honest, you know a toy that "Mwahs" is going to get passed around like hot cakes at your family holiday gathering.

I think this is one new holiday toy that's going to become a viral sensation. WowWee considers sophisticated robotic technology to be its "special sauce," according to Retail Merchandiser.

I'm just excited to see how much smooching is going on under the mistletoe with S.W.A.K.s on the scene!