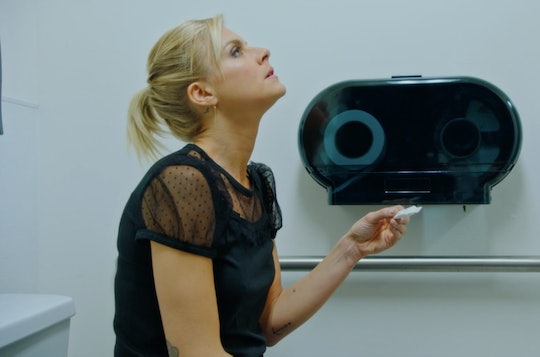 Getting pregnant is not always as easy as it seems. Thankfully, a new rom-com called Making Babies is tackling the struggle that many parents-to-be face on their journey to starting a family. Romper is thrilled to exclusively premiere the trailer for Making Babies, starring Eliza Coupe and Steve Howey as the determined couple trying to conceive. In the film, Coupe plays Katie Kelly, a married woman who is really struggling to achieve her dream of becoming a mom — something many women all over the world can relate to.

Howey plays her supportive husband, John, who is not only there for Katie every step of the way, but finds himself facing the reality that *he* could be the reason they haven't gotten pregnant yet. In the trailer, which you can watch below, you'll see that the film is clearly a comedy. But, the film is also jam packed with heart and emotion, which tells me I need to bring a box of tissues to the theater for this one.

The trailer is also full of relate-able moments, especially for those of you who weren't able to get pregnant easily. For starters, we watch as Katie tells her BFF, "As a woman this is the one thing I'm supposed to be able to do and I can't do it." Then there's that awkward moment in the doctors office where Katie is told her uterus is "one of the finest specimens" he's ever seen — because doctor or not, it's always super fun hearing a man talk about your uterus, right?

Speaking of the doctors office scene, this is where John is hit with the reality check that he might actually be the problem. It happens when the doctor suggest he have his sperm analysis, which leads John and Katie to a pretty sketchy office where he has to, uh, get his sperm into a plastic cup on cue. (Unrelated question: how has science not found a better way to analyze sperm yet?!)

Even more relatable? The moment everything seems to come to a head, with Katie and John's relationship becoming the struggle as both partners deal with the mental and emotional toll not being able to get pregnant takes on them. "I didn't know that having babies with you meant not having sex with you," John tells Katie as they argue. But, struggle or not, there is no love lost between these future parents.

"Baby or no baby, it does not matter if I don't have you," John tells his wife in an emotional moment where we watch as Katie dumps a box of pregnancy tests into the trash. Cue the tears I previously warned you about.

So, are Katie and John able to conceive? Honestly, the trailer leaves things up in the air. I guess we'll just have to wait for Making Babies to be in theaters to find out how the journey for this struggling couple ends.

Making Babies is set to open in theaters on March 29. Check your local theaters for movie times.