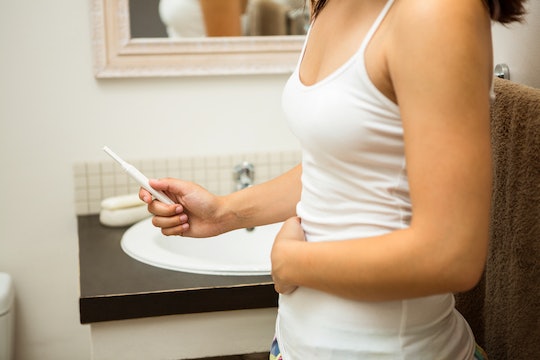 The Most Fertile Day Of The Year Is Apparently A Thing, & It's Almost Here

If you and your partner are feeling particularly cuddly (and more than a little bit randy) after a few cups of eggnog, it would appear as though you're not alone. Statistics show that the most popular month to be born in is September, and if you do your pregnancy math, that means that those babies were likely conceived in December. In fact, the statistics get even more specific, pointing to a certain date in the twelfth month of the year... and the most fertile day of the year is right around the corner.

That's right, the day of the year when more couples conceive than any other day is reportedly December 11, according to The Telegraph. (Bring back any memories, parents of September babies?)

The measure by which this was determined to be the most fertile day of the year was based on statistics reporting the most popular birthday of the year as September 17. That would set the date of conception around December 11. However, Time reported that the most popular birthday is closer to September 9, which suggests that it's not so much a "most fertile day" of the year, but rather that this time in December is associated with higher than average rates of fertility. The statistics don't lie: Several institutions, including reporters from FiveThirtyEight (who posted their findings on Github), have been following and analyzing decades of data to come to this conclusion. So if you're TTC or actively avoiding the possibility of having kids, you might want to get really close or really far away from your partner this week.

There are a lot of theories about why this is the case. When I first read the report, I assumed it was a decidedly northern hemisphere phenomenon. It felt like it probably had to do with being cooped up indoors with little else to do, but it turned out cabin fever isn't the cause, as noted by Visme. In fact, only in equatorial regions in Africa is September not the most popular birth month.

The Journal of the Royal Society of Medicines posited that the trend is likely due to the holidays, and the good feelings they engender in people (if you catch my drift). While that is certainly plausible, it does not explain why regions that do not traditionally celebrate Christian holidays also see an uptick in birth rates in September. For instance, China, Japan, Lebanon, and Israel also see a spike in births during the middle of September, and while those countries do celebrate Christmas, they don't celebrate it to the extent that we do in the United States or Mexico, at the very least.

So why is it that December seems to be so utterly popular in terms of human mating habits in all regions of the world but one? What about the last month of the year makes your partner that much more sexy?

In the Proceedings of the National Academy of Sciences of the United States of America (PNAS), scientists recently published findings about a strange phenomenon surrounding human interactions during the periods of summer and winter solstice. "For the sustained attention task," researchers wrote, "the maximum and minimum responses were located around summer and winter solstices, respectively." Which could mean that people who are trying to conceive (or just trying to have sex more regularly) are better at doing so during the solstice for some reason, because they're better able to stay engaged. Sexual intercourse and this dynamic in relationships is a sustained attention task, according to Frontiers of Cognitive Therapy.

PNAS argued that this is because of light exposure. While that apparently means different things in different hemispheres, it could also explain why month doesn't have as great an effect on conception in certain equatorial regions. They simply do not have the same shift in day and night hours that those of us farther north and south are subjected to.

Although, it's a lot more fun to think of it in relation to how much mulled wine you had at the office party. Nevertheless, the most fertile day of the year is fast approaching, so look out, everyone.